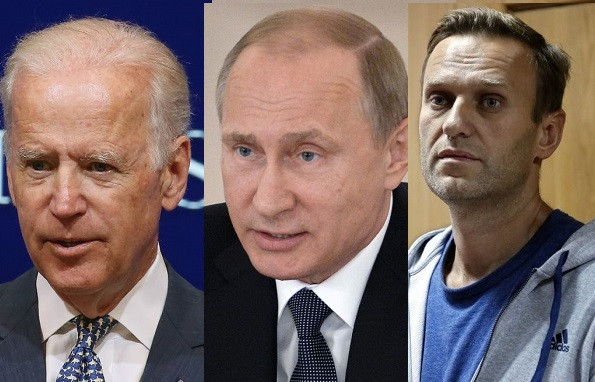 Joe Biden, Vladimir Putin, and  Alexei Navalny.US President Joe Biden is reportedly set to issue sanctions on Russia over the poisoning and jailing of Russian opposition leader Alexei Navalny. According to Politico, the US is expected to coordinate with European allies a sanctions rollout against Russia in the coming weeks.    Sources told the news outlet that US sanctions on Russia would be the Biden administration's first major step in holding the country accountable for human rights abuses.  Details of the sanctions are yet to be revealed, but one source claimed that the US is 'considering available policy options'.  'We won't stand by idly in the face of these human rights abuses,' the official said. Daniel Fried, who served as assistant secretary of State for European and Eurasian Affairs at the State Department, told Politico: 'I don't think we can stop [Russian President] Putin from sending Navalny to a penal colony. But by acting quickly now, at least it's in Putin's calculation that the US is willing to act.' Sources also said that the Biden administration is also not starting from scratch on the Navalny issue, having received a comprehensive sanctions package from the previous administration, which was handed over during the transition process.  The insiders told the news site that the package proposed three types of sanctions: Magnitsky Act sanctions on the individuals who detained Navalny; sanctions under the Chemical and Biological Weapons Control and Warfare Elimination Act of 1991 (CBW Act); and sanctions under Executive Order 13382, which is “aimed at freezing the assets of proliferators of weapons of mass destruction and their supporters,” according to the State Department.  This comes a day after European Union foreign ministers agreed to impose new sanctions against Russian officials linked to the jailing of Navalny, and expressed concern that the government in Moscow appears to see the 27-nation bloc as an adversary. 'We reached a political agreement to impose restrictive measures against those responsible for (Navalny's) arrest and sentencing and persecution,' EU foreign policy chief Josep Borrell said after chairing their meeting in Brussels.  Navalny, 44, was poisoned last August with the nerve agent Novichok, a lethal substance considered a banned chemical weapon by the Organisation for the Prohibition of Chemical Weapons. The Kremlin denied involvement, but the State Department publicly attributed the attack to the Russian Federal Security Service (FSB) in December. After months of receiving treatment in Germany, Navalny recovered and flew home to Moscow, where he was arrested for breaking the terms of a probation agreement.  He later was sentenced to nearly three years in prison earlier this month, sparking massive protests across Russia and condemnation by the international community.    The post US President Joe Biden set to announce sanctions on Russia over poisoning and jailing of Russian opposition leader, Alexei Navalny appeared first on Linda Ikeji Blog.
Courtesy of spobam