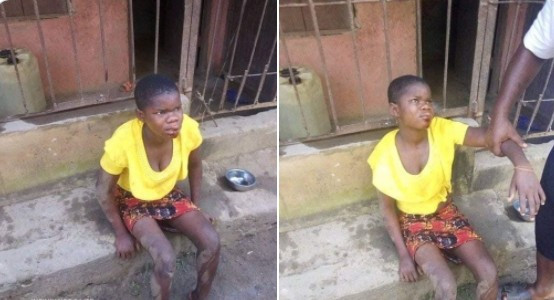 The Nigeria Security and Civil Defence Corps (NSCDC) in Abia State has said that the 13-year-old girl who was in the news days ago, for allegedly being pushed down from a two storey building by her boss, jumped down from the building herself to evade punishment after being accused of stealing.  State Commandant of the corps, Vincent Ogu said Uduak Willy who lived with one Emeka Igwe and his wife, Aniekan at  204, Niger Stone, on Enugu-Port Harcourt Expressway, near Ariaria Market, Aba, Abia State, was accused of stealing N500 from the house and beaten by the couple.  Ogu said the command was alerted about the incident by the Special Adviser to the Abia State governor on teenage matters Chinemenma Umesaka. He further disclosed that after Igwe was lured out from his hiding by Aba Divisional Officer of the NSCDC Uche Uduma, he was arrested alongside his 50-year-old mother-in-law, Christiana Godwin for “alleged involvement in child-trafficking, child-labour, domestic violence and attempted murder”. He said;  “When I got the disturbing information on the ordeal of the girl from Umesaka, I quickly mobilised my men and ordered them to rescue the victim and arrest the perpetrators of the dastardly and inhuman act against the minor." Uduak was later taken to the Federal Medical Centre, Umuahia, where she underwent a series of medical tests for internal injuries.  The victim who spoke to newsmen denied stealing the couple's money and also denied being pushed down by Mr Igwe as alleged on the social media.  Mr Igwe and his wife on their own part denied pushing her down from the building, but admitted beating her over the missing money. The man also denied going into hiding, and claimed that he took the girl to a clinic for treatment immediately after the incident.The post Update: 13-year-old girl jumped down two-storey building to evade punishment from her bosses in Abia – NSCDC appeared first on Linda Ikeji Blog.
Courtesy of spobam