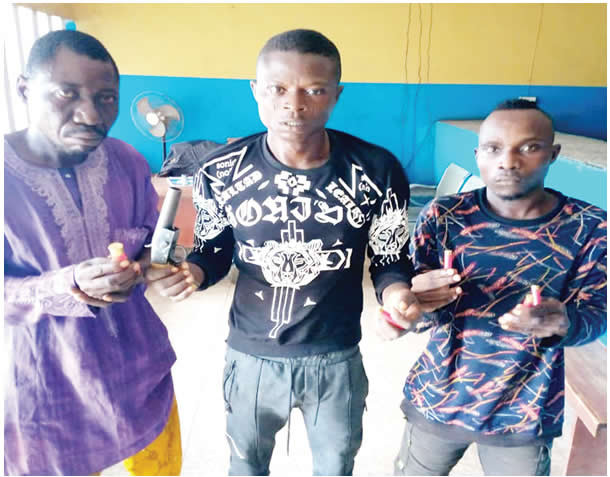 Two members of a robbery gang have been arrested while fleeing and their herbalist was also arrested. The suspects reportedly fled their hideout three weeks ago when men of the Special Anti-Robbery Squad, Ogun State Police Command, stormed the Adesan area of Mowe in the Obafemi-Owode Local Government Area of the state. The Ogun State Police Public Relations Officer, Abimbola Oyeyemi, said on Monday that the suspected robbers, Saheed Bello and Bello Sadiq, were arrested in Ibadan, Oyo State, while their herbalist, Ibrahim Rasheed, was apprehended in Osun State on Monday, June 29. The PPRO said the suspects were arrested three weeks after four of their gang members were apprehended in their hideout in Mowe. He added that the gang were responsible for a number of robbery cases around Mowe/Ofada. He said, “Saheed Bello, who is the leader of the gang, and Bello Sadiq were traced to the Academy area of Ibadan based on intelligence investigation embarked upon by the CSP Tijani Mohammed-led SARS and they were apprehended. “Their arrest led to the arrest of one Ibrahim Rasheed, who is the gang’s herbalist in Ile-Ogbo, Osun State.” According to the PPRO, one locally-made single-barrelled pistol and five live cartridges were recovered from the suspects. The post Two fleeing robbers and their herbalist arrested in Oyo and Osun appeared first on Linda Ikeji Blog.
Courtesy of spobam