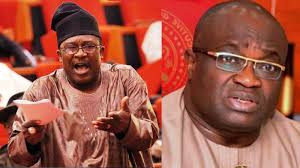 Abia state governor, Okezie Ikpeazu, has blasted Senator Smart Adeyemi who during the plenary of the Senate on Tuesday, February 23, described him as a “drunkard”. The Kogi senator who contributed to a motion on Safe School Initiative in Nigeria alleged that while Abia state is governed by ''durnkards'' and a “champagne drinking man”, some Governors are working hard to make the lives of residents of their states better. Adeyemi seemingly said this in response to a social media post allegedly linked to Abia-born Senator Enyinnaya Abaribe, which cast aspersion on Governor Yahaya Bello of Kogi state. Read here. Reacting to Adeyemi's comment, Governor Ikpeazu in a statement released, said if  Senator Adeyemi was of sound mind, he should have known that when it comes to education, Abia is miles ahead of his home state of Kogi. According to Governor Ikpeazu, Abia state is not just ahead of Kogi in education but in every single area of development.” A statement signed by his Chief Press Secretary, Onyebuchi Ememanka, reads: “If Senator Adeyemi had his faculties intact, he should have known that under the watch of Governor Okezie Ikpeazu, Abia State has maintained first position in WAEC Examinations in the entire country for five years now. Kogi has not come close to the first 20. Never!”Ever since Dr. Ikpeazu became Governor in Abia State, there hasn’t been one single case of attack on any school anywhere in Abia State.Senator Smart Adeyemi is clearly non-compos mentis. If not, he would have known that while his State is still awarding contracts for the renovation of schools, Abia had long completed more than 500 classroom projects scattered across schools in Abia State, and still counting.It is obvious that Senator Adeyemi is battling with acute dementia and has lost every of his instincts as a journalist. If not, he would have known that just last week, the National Bureau of Statistics adjudged Abia State as No. 3 on the list of States that attracted foreign direct investments, with only Lagos and Abuja ahead of Abia State in the entire country.It takes much more than drinking champagne to guide a state from zero foreign investments to No. 3 in the country. Kogi State featured prominently on the list of states that attracted zero investments. It is only a state that is peaceful and secure that has the capacity to attract such cross border investments.Some weeks ago, the National Center for Disease Control (NCDC) branded Kogi State unsafe for their consistent lip service to the COVID-19 pandemic. Senator Adeyemi was never heard to have either responded to that statement by the NCDC or raise it on the floor of the Senate. Yet, he has the effrontery, or rather, the buffoonery, to abuse a Governor whose state has maintained one of the lowest COVID-19 fatality rates in the country through proactive measures to protect our people.Between a Governor who has consistently denied the existence of Covid and the one who has put in place measures to protect his people, one wonders who is the drunkard.Let us even interrogate the statements of Senator Adeyemi further. According to him, his comments against Governor Okezie Ikpeazu were in response to some comments allegedly made by the Senate Minority Leader, Senator Enyinnaya Abaribe against the Governor of Kogi State in a social media post.This response, without more, confirms that Senator Adeyemi is mentally unstable. If Senator Enyinnaya Abaribe made negative comments against the Governor of Kogi State, the proper approach was to respond to the Senator directly. Governor Okezie Ikpeazu cannot, by any stretch of the imagination, be vicariously liable for the comments allegedly made by Senator Abaribe.Interestingly, Senator Abaribe clearly denied ever making such comments against the Kogi State Governor.For the avoidance of doubt, Governor Okezie Ikpeazu does not take alcoholic drinks and he is shocked at the schizophrenic outburts of Senator Adeyemi whom he has never met nor had any dealings whatsoever with officially nor privately.Governor Ikpeazu makes it abundantly clear to the Senator that save for the parliamentary privilege which he unfortunately enjoys, Senator Adeyemi would have been put to the strictest proof of his wild and senseless comments before a Court of Law.Governor Ikpeazu concludes by advising the Senator to quickly seek psychiatric help before his case becomes unmanageable.” The post Seek psychiatric help before your case becomes unmanageabl e- Governor Ikpeazu blasts Senator Adeyemi who called him a ”Drunkard” appeared first on Linda Ikeji Blog.
Courtesy of spobam