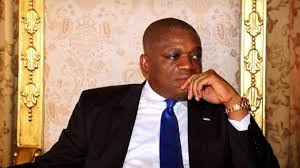 Protesters under the aegis of Concerned Citizens of Abia North in Abia State, today stormed the National Assembly with the singular request for the senate president, Ahmad Lawan, to declare vacant the seat of the Senate Majority Whip, Senator Orji Uzor Kalu. Kalu who served as the state governor from May 29, 1999, to May 29, 2007, has been in prison since December 2019 after he and one of his former aides, Ude Udeogo, were found guilty of defrauding the state when he was in office. The protesters carried placards with the different inscriptions such as  ” Senate President obey section 68(1)(f) of the Constitution and declare Abia North Senatorial seat vacant;  ” Our voice must be heard, declare Abia North Seat Vacant now”; ” Declare Abia North Seat in the Senate Vacant”; ” Abia North Constituents are saying declare the Seat Vacant.” Leader of the group, Chukwudi Chukwu said declaring the seat would enable the Independent National Electoral Commission, INEC to conduct a fresh election to elect a Senator who will represent Abia North Senatorial District in the Senate. “We are indigenes of the five (5) Local Government Areas: Arochukwu, Bende, Isuikwuato, Ohafia and Umunneochi that make up the Abia North Senatorial District of Abia State. We formally notify Your Excellency of the absence of our Senator Dr. Orji Uzor Kalu, from the senate. The conviction and incarceration of the senator representing Abia North, Dr. Orji Uzor Kalu leading to his long absence from the National Assembly has effectively silenced our voices.Abia North constituents have no representation in the Nation’s highest deliberative body and cannot participate in matters that affect them. Citizens in Abia North Senatorial District have every cause to feel abandoned, angry, less optimistic about their future because they have no representation in the senate. Democracy thrives and is significantly enriched when citizens participate in the process, and can speak through their elected representative.Denying citizens the right to be represented inspires disaffection and provokes contempt for both the Legislative body and the democratic process. More fundamentally, it does grave violence to the democratic imperatives of representation.Your Excellency, we are law-abiding citizens and have confidence in both the democratic process and your ability to assuage our concerns and repair this anomaly. We are deeply and fervently committed to the democratic process and respectfully urge you to restore our voice in the legislative process muted by the incarceration of our Senator.We, therefore, pray you to use your good offices and declare the Abia North Senate seat vacant to enable INEC to conduct a fresh election to elect a senator who will represent us at the senate. Your Excellency, declaring a vacancy in Abia North Senatorial District will repair the monumental injustice done to us and encourage hope in our senatorial district.We deserve to have an active voice to speak for us in the senate as we have previously had, more so now that the deadly Covid-19 Pandemic is ravaging countries and across the land; non-selective. Again, our Senatorial District is grossly prone to ecological disasters, especially erosion and landslide. We are regrettably backward and disadvantaged, and in dire need of Federal Government Presence; to be canvassed through our senate representative, akin to the other districts of the state and federation. We pray our demand meets your kind consideration and good conscience.” he said The Senate is yet to decide what to do with Kalu's seat.  On May 8th, the Supreme court nullified Kalu's conviction on grounds that the presiding judge lacked the jurisdiction to have presided over his case. The apex court ordered a fresh trial, though Kalu is still in prison custody. An appeal for his release will be heard by Justice Mohammed Liman of the Federal High Court Abuja today, June 2.The post Protesters storm National Assembly, ask Senate President to declare Orji Uzor Kanu’s seat vacant appeared first on Linda Ikeji Blog.
Courtesy of spobam