Former Miss Universe Malaysia 2017,  Samantha Katie James has sparked an outrage online for criticizing the ongoing Black Lives Matter protests in the US over George Floyd's death. The 25-year-old took to her Instagram Stories to call protesters, who are speaking up against police brutality towards African Americans and racism "foolish humans."She declared that the reactions shown by protesters were apparently proof that the “whites won.”"I don’t live in America and it has nothing to do with me, but to me, it seems like the 'whites' won. If you’re angry, you response in rage and anguish and that means it has power over you. They have power over you. Foolish humans. (sic)"Addressing black people, she wrote, "To the black people: Relax, take it as a challenge, makes you stronger. You chose to be born as a 'coloured' person in America for a reason. To learn a certain lesson. Accept it as it is, till now hunger and poverty still exists. It is what it is. It’s inevitable. Best you can do is remain calm, protect heart, don't allow it to crumble. That’s your responsibility. " 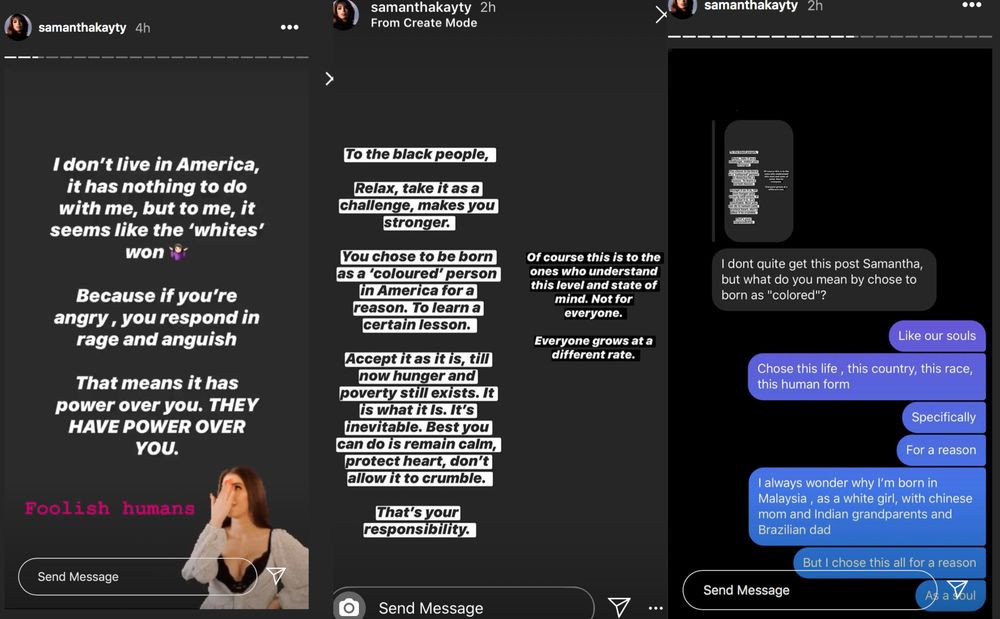 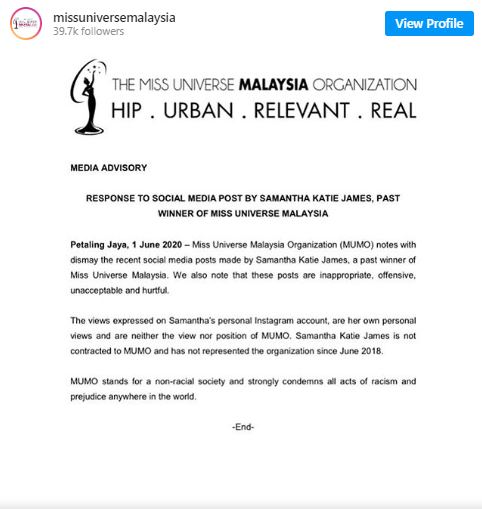 More than 15,000 people have so far signed a petition on Change.org for James’ crown to be revoked by Miss Universe Malaysia in light of her comments. The petition against James claimed that she was unfit to represent Malaysia and seeks to compel the pageant runners to strip the latter of her crown and title. "Her ignorance and lack of self and privilege awareness do not reflect the Miss Universe Malaysia title and with this petition, we hope she will be stripped of her title," read the petition. The petition was updated with a posting of the Miss Universe Malaysia Organisation (MUMO) statement in which MUMO had distanced itself from James and her remarks. MUMO asserted that she has not represented the organisation since June 2018. The petition, however, said MUMO's stand was "unsatisfactory" and said 'further action must be taken against James if the organisation was truly anti-racist' . "If they strongly condemn all acts of racism and prejudice, they would've stripped her of her crown and title."Stripping James' crown and title would serve as an example that your organisation will not tolerate any forms of prejudice be it past, present or future winners," said the petition.