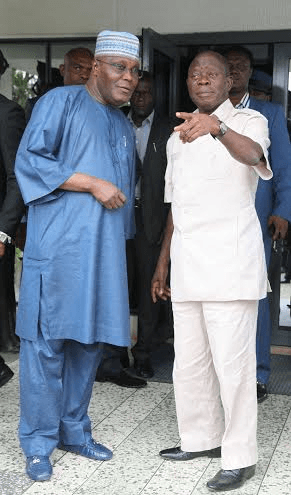 Former Nigerian Vice President Atiku Abubakar has alleged that former Governor of Edo state and chairman of the ruling All Progressive Congress, Adams Oshiomole frustrated the Obasanjo-led administration's plan to remove fuel subsidy.  The former Presidential candidate of the Peoples' Democratic Party revealed this in tweets he shared on Saturday night. He recalled being the one assigned to negotiate with the NLC chairman, a meeting that ended up not being unsuccessful.  Atiku tweeted;  “The Obasanjo government in which I served commenced a phased subsidy withdrawal. I was tasked with negotiating with then NLC Chairman and current APC Chairman who stood strongly against it. Nonetheless, we achieved two phases of subsidy removal of fuel and complete withdrawal of subsidy of diesel before we left office. -AA 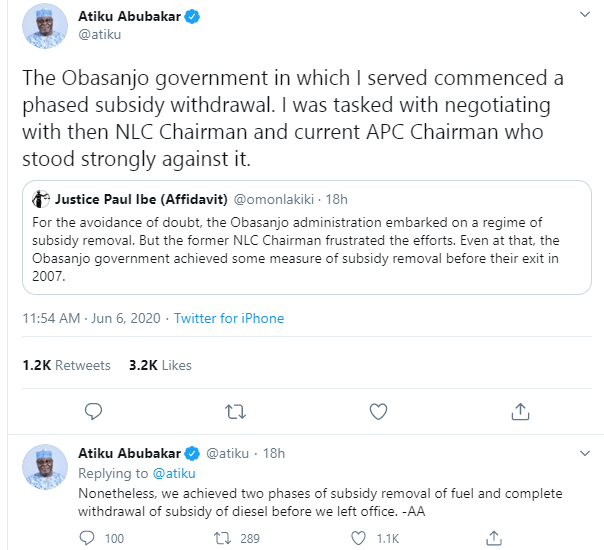 This is however coming few hours after Nigerian Government got rid of costly fuel subsidies and moved to a market-based pricing regime for petrol. Recall that the fuel subsidy programme has been a controversial topic in the country in the last few years.   The post Oshiomhole kicked against fuel subsidy removal under Obasanjo – Atiku appeared first on Linda Ikeji Blog.
Courtesy of spobam