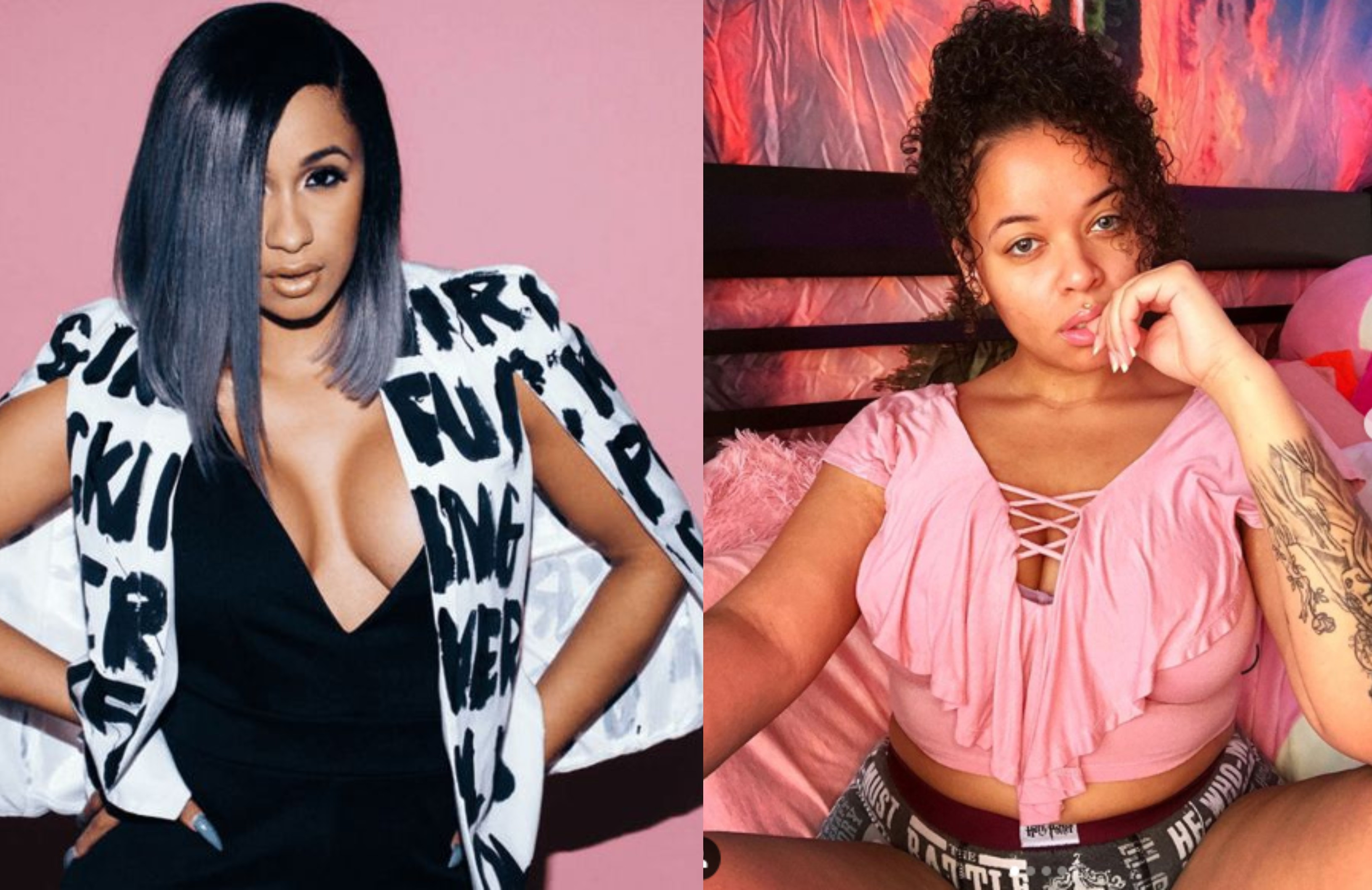 Cardi B has lashed out at a female rapper, Dela Wesst who accused her of stealing her lyrics for a song she got featured on.  Dela Wesst had accused Cardi of stealing lyrics from her freestyle for Blue Face's 'Thotiana" after her video went viral on social media.  CARDI B allegedly STOLE FROM ME. #CopyCatCardi #DelaWesst #TheOGCopy (watch the rest on https://t.co/cPHes56fSZ) pic.twitter.com/l8OFGnorVs— delawesst (@delawesst) June 4, 2020 She slammed Cardi B for claiming she is Afro-Latina and also attacked her fans for sticking with her even with the  "mountain of evidence" she released.  Dela tweeted;  I’M TRYING TO FIGURE OUT WHEN DF YOU USED THE TERM “AFRO-LATINA?” Seems like QC stealing more than just lyrics. THIS AINT YOU. You’re trying to clean up your shit with yet ANOTHER borrowed personality trait. STA LOCAAAAAA, you’re a fucking mess sis. Get off the internet. 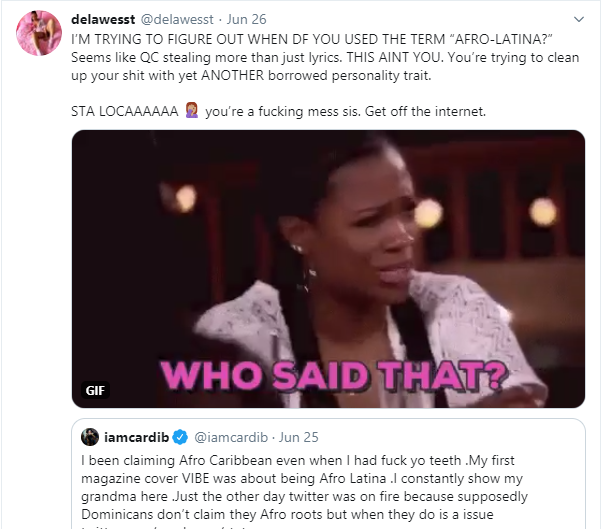 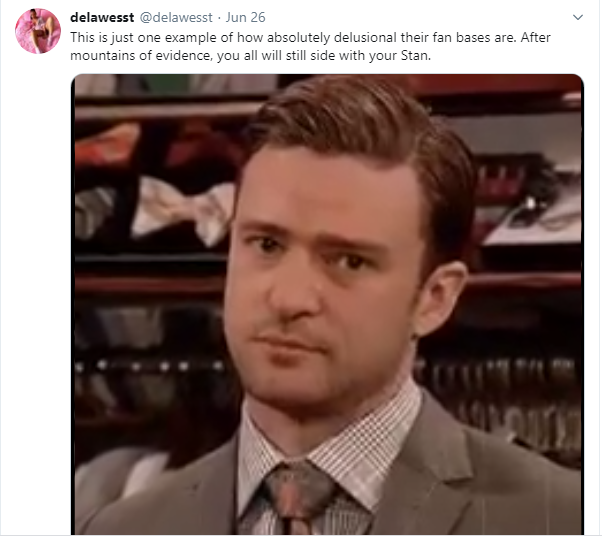 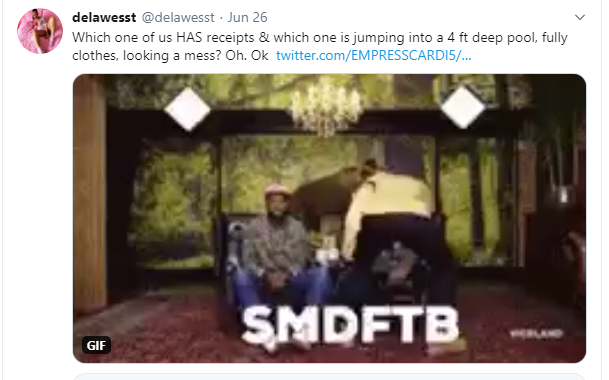 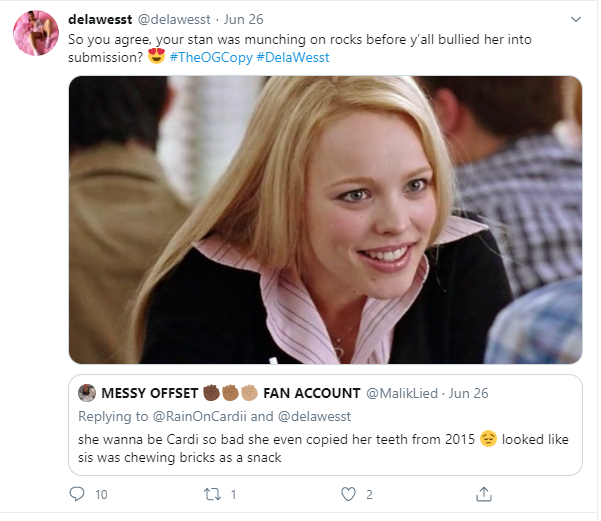 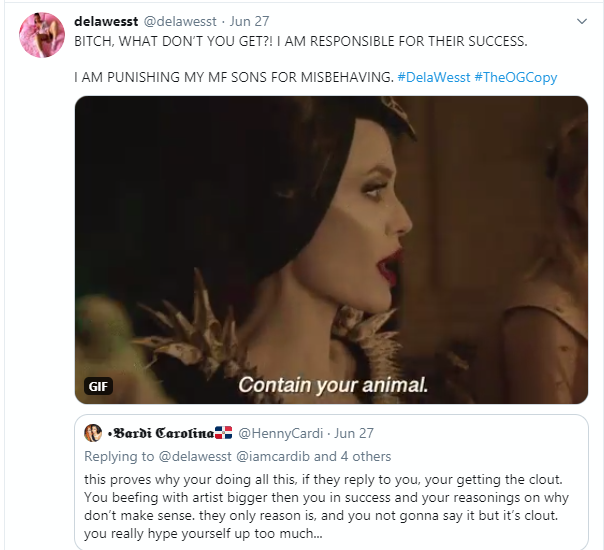 Dela Wesst also slammed those comparing Cardi B to Nicki Minaj by alleging that she doesn't write her lyrics herself. 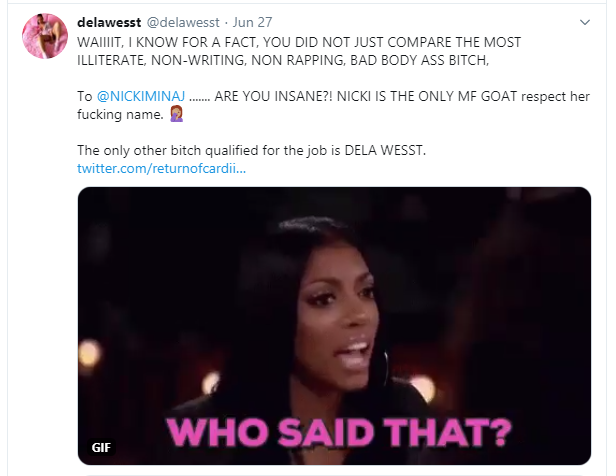 Dela further attached the lyrics she claimed Cardi B stole, on a photo of her and her daughter, Kulture. 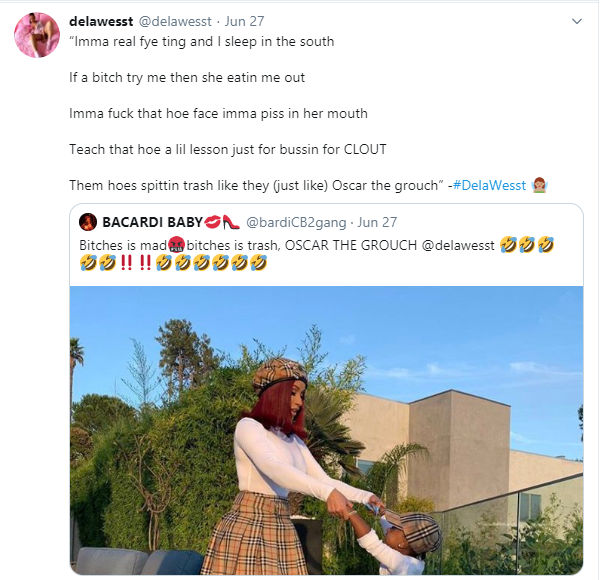 Cardi B who reacted to the allegation, stated that she chose to respond because Dela crossed the line by attacking her fan page and attaching "sh*t" on a photo of her and her daughter.  She tweeted;  First of all you weird ass bitch u been trying me for hot minute .You really cross the line when u stalkin my fans page and put this shit on a pic of me & my kid .SO YES THATS I’m bringing my kid 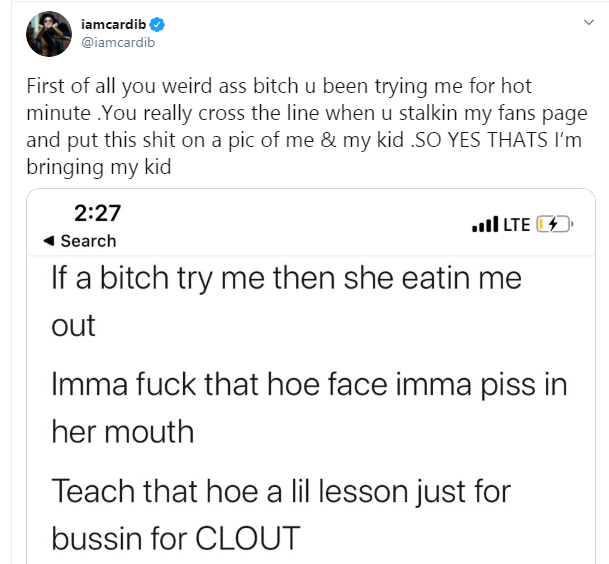 Cardi B who insisted that she never knew who Dela was until she started using her name for TikTok videos, also disclosed that the lyrics she was accused of stealing was written in January 2019 while Dela released her freestyle in February.  Cardi added;  Then you claim I stole thotiana from you when you put your freestyle one day after WACK ANNOUNCE I’m on the remix of a song I been record it that I WROTE and RECORD IT infront of blue face & WackYou posted your lyrics on the other post it said February 6 my lyrics are from January 9th ..Goodbye sweety your DISTURB.Clout chase from somebody else.CLOWN now go do a video about THAT!Sooooo stop WITH YOUR SHIT .Never Hurd about you b4 you started using my name for tic too .Stop chasing clout and chase a bag and a dentist like I DID SIS !That was fun! …I’m getting off the internet for a couple days see ya when I see yaaa …..BYEEEETAAAAAAAA 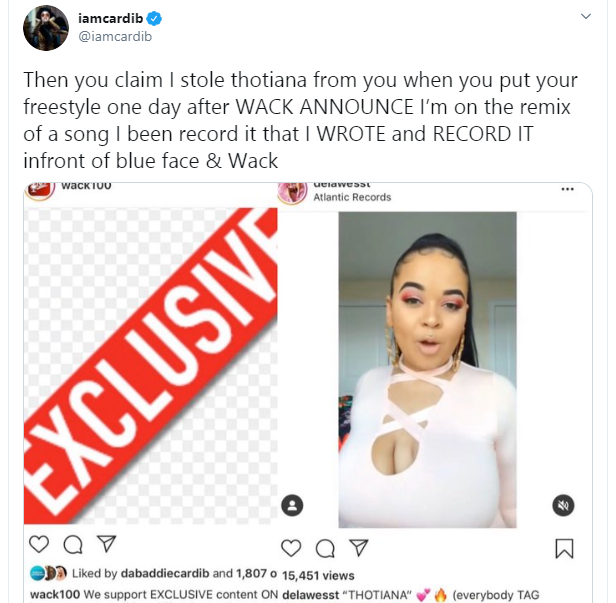 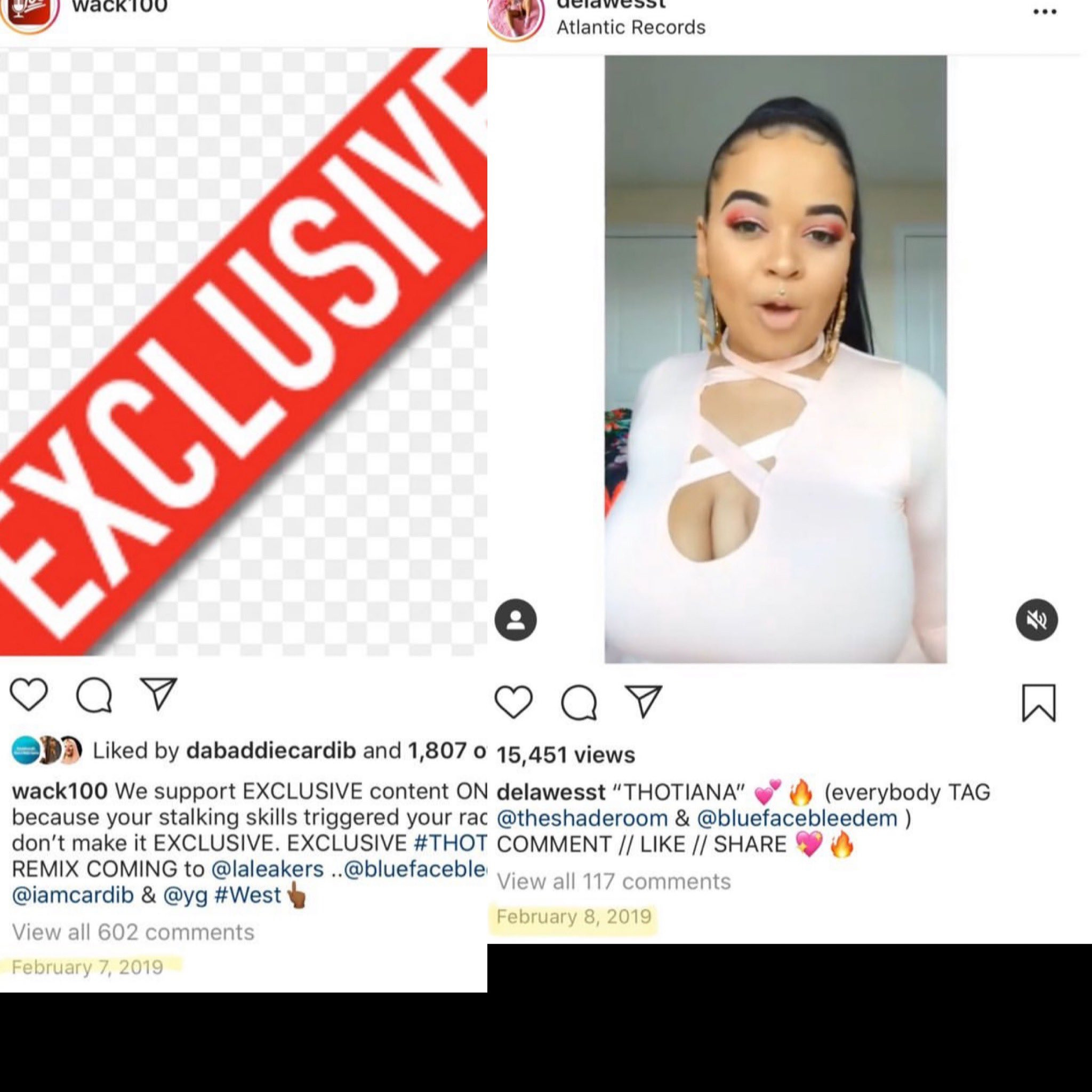 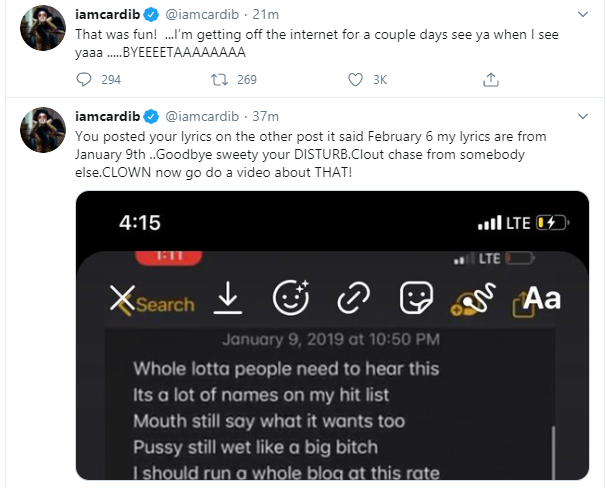