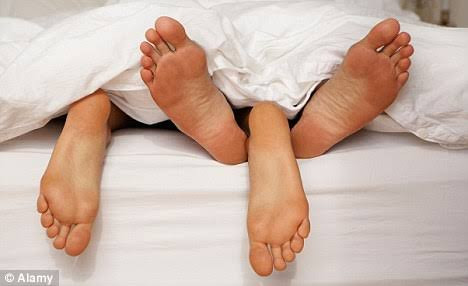 According to a new study, a large orgasm gap still exists between men and women as men at 66% are still climaxing more often than women at  43%. The new study conducted by sex toy company Lelo and released on National Orgasm Day (July 5) has revealed that almost one in 20 women have never orgasmed with a sexual partner.  The result of the survey that involved  4,000 heterosexual female and male participants from across the UK also revealed that many male partners are unaware that women are not climaxing with majority of participants in relationships saying their partner orgasms 60% of the time.    According to the study, this could partially be due to some women not being physically able to climate during sex, rather than lack of trying by their partner.  Additional research by Lelo revealed three in 10 people fake their orgasms on a regular basis, with women more likely to do so, according to the study. And only a third of those surveyed have spoken to their partner about their orgasms, or rather lack of orgasms – with men (73%) more likely to raise the issue, compared to women (56%).‘The orgasm gap refers to the stats that show that in heterosexual sexual experiences men orgasm more than women,’ explains Kate Moyle, sex and relationships expert at Lelo. ‘We also see that this gap doesn’t exist when women are having sexual experiences with women, which suggests that the gap is gendered.’ According to Kate, factors that increase the orgasm gap include lack of education, cultural differences and the fact that many people focus on intercourse to reach climax meanwhile truth is lots of women require clitoral stimulation to climax.Explaining why the clitoris is 'so ignored' Kate says;‘This is reinforced by what we see represented in many forms of sex online and in the media, where women appear to be orgasming from penetrative sex with little or no arousal,’ she says. ‘Commonly we also split up foreplay and sex, which puts the focus on “sex” as the main event, when if we reframe and think of it all as sex where the goal is pleasure then the clitoris, which is the main source of female pleasure with 8000 nerve endings would get more attention.‘It’s not all about taking the focus off penetration, but ensuring that people are aware then when women are aroused, the clitoris becomes erect like the penis, and this means the internal structure can be stimulated and can create pleasurable sensations through intercourses, but arousal and being turned on is the key.’‘The side effect of this lack of sex education is few of us feel confident with sexual communication, and being open about what feels good for us, and this is one of the key routes to creating change.’ The post Men are still having more orgasms than women – New study reveals 3 in 10 women fake their orgasms regularly appeared first on Linda Ikeji Blog.
Courtesy of spobam