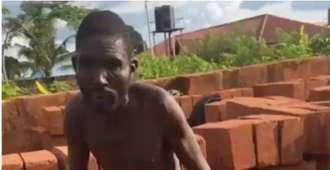 A middle-aged man got more than he bargained for after being nabbed defiling two minors aged 6 and 5-year-olds in Ekpoma, Edo state.  The suspect who was beaten by residents of the community, has been handed over to soldiers for more investigation.  Here is the video;       View this post on Instagram         Man caught red-handed defiling two girls aged 6 and 5-years-old in Ekpoma, Edo StateA post shared by Lindaikejiblog (@lindaikejiblogofficial) on Jun 2, 2020 at 3:33am PDT This occurred few days after a UNIBEN student, Miss Vera Uwaila Omozuwa was raped and murdered in a church in Benin, Edo state's capital. The post Man caught red-handed defiling two minors in Edo state (video) appeared first on Linda Ikeji Blog.
Courtesy of spobam