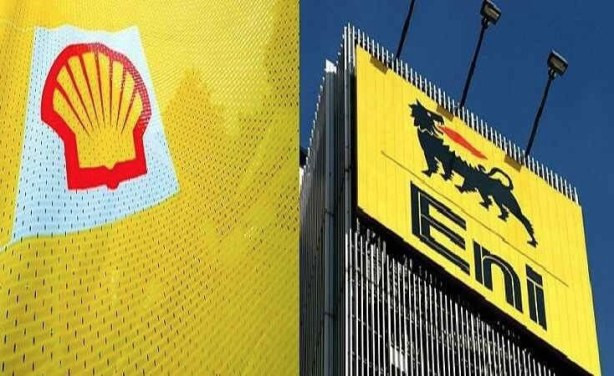 The Nigerian government's $1 billion lawsuit against oil giants; Royal Dutch Shell and Eni, has been dismissed by a UK court on grounds of lacking the jurisdiction to hear the case centered on the Malabu oil deal of 2011. British Judge, Christopher Butcher who gave the ruling in a virtual hearing on Friday May 22, said the cased could not go ahead in England, and also denied the Nigerian government the permission to appeal against the judgment.  Barnaby Pace, a journalist and oil campaigner who monitored the judgement which has set back the long standing trial, tweeted;  Justice Butcher of the English Commercial Court should rule this morning whether Nigeria's $1bn lawsuit against Shell and Eni over alleged bribery in the massive OPL 245 deal will go ahead in the UK or struck out as being duplicative of the ongoing proceedings in Italy.The hearing's happening online so its an old photo outside the Royal Courts of Justice! The listing says the hearing will be for "Consequentials /Further Arguments" so there will likely also be arguments over costs as well as the handing down of a judgement.Justice Butcher rules that the English court does not have jurisdiction. More details to follow once we get the written ruling. This of course doesn't affect the ongoing Italian proceedings where Nigeria has a separate legal claim. Eni is now making argument for costs against the Federal Republic of Nigeria.FRN has agreed with Shell that they will pay 60% of Shell's costs. Justice Butcher's written ruling finds the English case and the Italian proceedings have the same parties, same essential facts (or cause of action), and considered broadly the cases have the same object in mind – redress for alleged bribery by Shell and others.Nigeria's lawyer lays out that the defendants; Shell, Eni & EVP have racked up an "excessive" £3m in costs, compared to £850k by Nigeria. They call the defendants' approach "heavy handed" and say its not appropriate for the defendants to claim costs for issues they dropped.Interestingly Justice Butcher ruled against Shell's arguments that Nigeria misled the court in its initial application. He found: "it does not appear to me that there was a failure to disclose or misrepresentation of matters which might have misled the court"Justice Butcher says he won't use Nigeria's lawyer's terms of "staggering" or "eye watering" but that "there probably has been a heavy handed approach on behalf of the defendants to resisting" the claim and that they racked up £3m in costs is "concerning" to the court.Justice Butcher says costs overall were "decidedly high" and orders that FRN pay the same amount of Eni's costs that Nigeria agreed with Shell. He says Obi/ EVP's arguments were "optimistic" given Obi has been convicted in Italy so Nigeria will pay less of their costsNigeria argues that they should be allowed to appeal the judgement on the basis of several legal precedents. Eni and Shell disagree with Nigeria's arguments and say Nigeria shouldn't be allowed to appeal.Nigeria will have to seek permission to appeal from the court of appeal as Justice Butcher says he won't grant permission.That's the end of the hearing. Any intrepid journalists who'd like to report on the ruling please do get in touch and I can pass on a copy of the judgement. 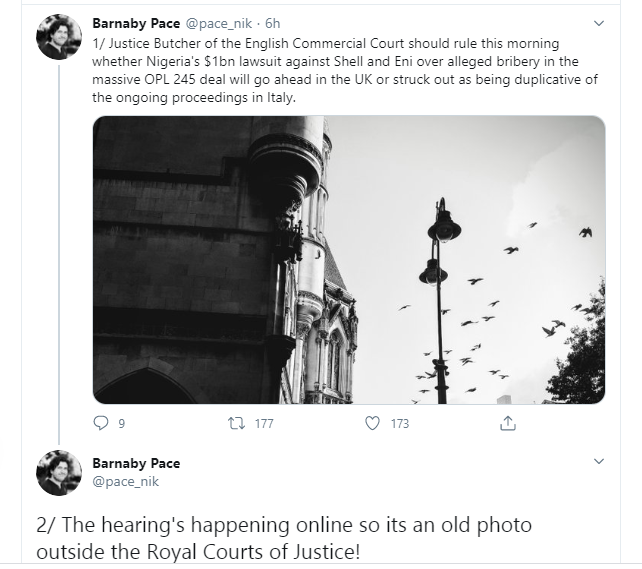 The Nigerian government had sued Shell and ENI for $1.1 billion in 2011 over the licencing of OML 245 which the nation claims the said companies made it miss as a result of bribes they paid to Malabu oil, owned by former Minister of Petroleum Dan Etete.  While Shell and ENI paid a signature bonus of $210 million to the federal government, they paid $1.1 billion to buy 100 percent interest in the oil block from Malabu. The entire $1.3 billion was transferred to the account of the federal government in London, UK, from where Malabu was paid its $1.1 billion. However both oil companies have denied the bribery allegations, with  Eni saying it made no profit from the deal because “Nigeria declined to grant a mining license”.The post Malabu Oil Deal: Nigerian government’s $1bn lawsuit against Shell and Eni struck out by UK court appeared first on Linda Ikeji Blog.
Courtesy of spobam