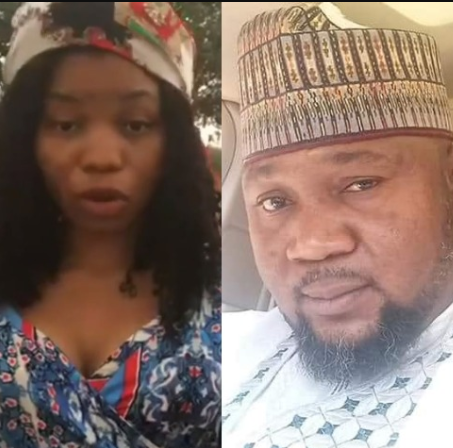 The Kogi Commissioner for Water Resources, Hon. Abdulmumuni Danga, who allegedly brutalized and raped a former beauty queen for calling him out on Facebook was called in for questioning. However, there has been pressure from the state governor and others in the political class to pervert justice, Segun Awosanya has said. Earlier this year, a woman identified as Elizabeth, urged the commissioner on Facebook to assist his sister and family financially.  Danga was offended by the post and he allegedly hired thugs to kidnap Elizabeth from her home with her three-year-old son. After Elizabeth was released, she shared a video, showing the wounds allegedly inflicted on her by the commissioner. She also claimed that he raped her. 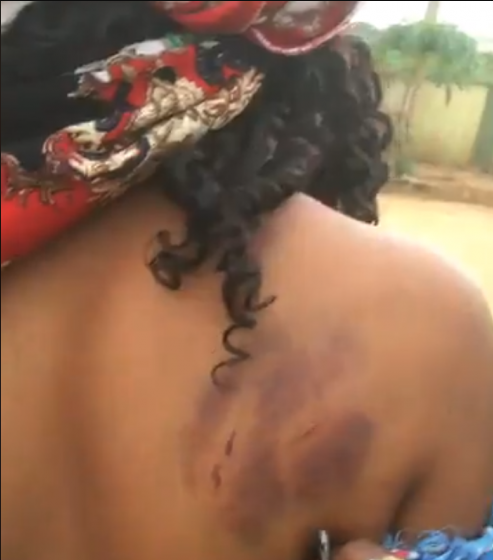 Elizabeth said at the time: "After making the post, they started attacking me on social media and he sent some guys to come and get me.  "On getting to me, they flogged me. He flogged me himself, stripped me naked and made a video of me threatening to post it when next I make any public comment about it.  "They also made me apologize that what I said about him was not true under duress. I had to do so because they were all over me. "The commissioner also smashed my phone and destroyed it totally, saying that maybe I might have been recording what was happening or I have been recording before getting there." Nigerians were angered after Elizabeth shared her story and people used their platforms to call for justice. Activist Segun Awosanya, popularly known as Segalink, took to Twitter to reveal that Hon. Danga was taken into custody on Tuesday, June 2, but was later released after he posted bail. Segun said "damning evidence" gathered against  Hon. Danga led to him being taken into custody. A video of the commissioner in custody shows him refusing to write a statement. He eventually did when he realized Sega was publicizing it. "He is refusing to make statement and he is proving he is above the law. I have called the CP in charge of Intelligence to alert him the world is watching," Segalink, who was reporting in real-time, wrote on Twitter.Sega said Danga's victim has enough evidence to show that she has been victimized by the commissioner. He wrote: "Elizabeth has gone through Hell. There’s been many threats to her life on the record & the @PoliceNG investigation have all the evidence. "They made a call to Elizabeth telling her she can be killed by the whim of she refuses to let it go. They dictated several Facebook posts to her to make in order to be free from their crosshairs. The police have this on the record. That man must not be let off the hook." Sega added that, "It took over two months to get Hon Danga to answer for his crimes at the FHQ due to obstruction from the Kogi State Governor." He also alleged that other powerful people are behind Hon. Danga  He wrote: "This is unlike any other case but a Rape allegation that is supposed to be a crime against the state. Unfortunately the chief security officer of the state is the one obstructing justice. It’s a game of evidence & we came with a trailer load." He later added that Hon. Danga has been "released on bail pending the need to invite him again as the investigation proceeds." He added: "Till now we are unsure the condition of his bail and why he was released despite the damning evidence against him. We also acknowledge the pressure from Kogi Governor and police’s subservience to political push due to the lack of operational independence. We are watching!" Below is a video of Hon. Danga when he was taken into custody and after his release.      View this post on Instagram           A post shared by Lindaikejiblog (@lindaikejiblogofficial) on Jun 2, 2020 at 3:11pm PDT 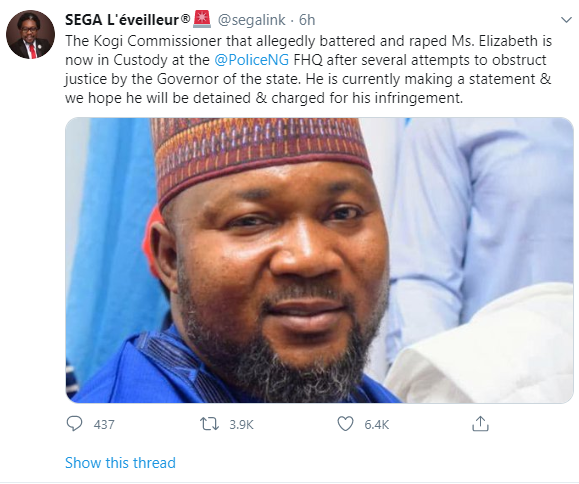 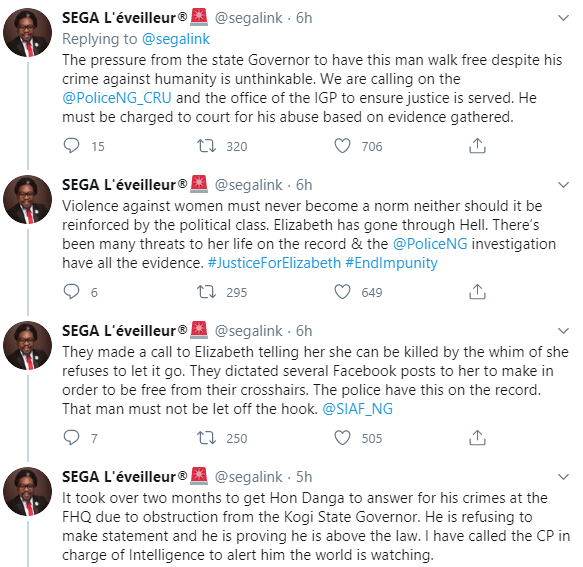 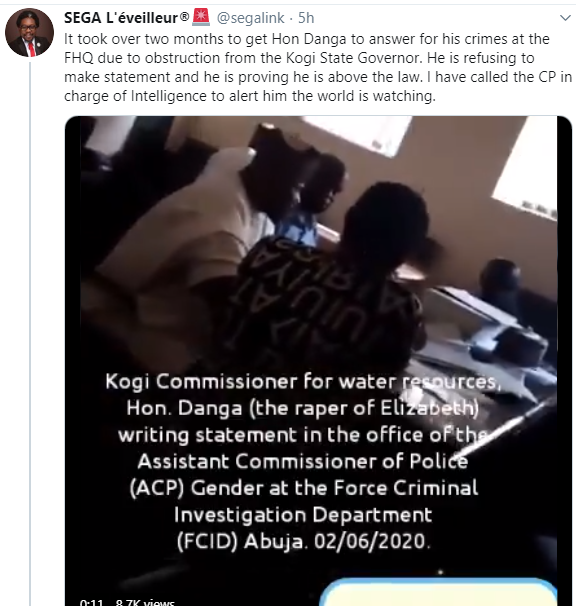 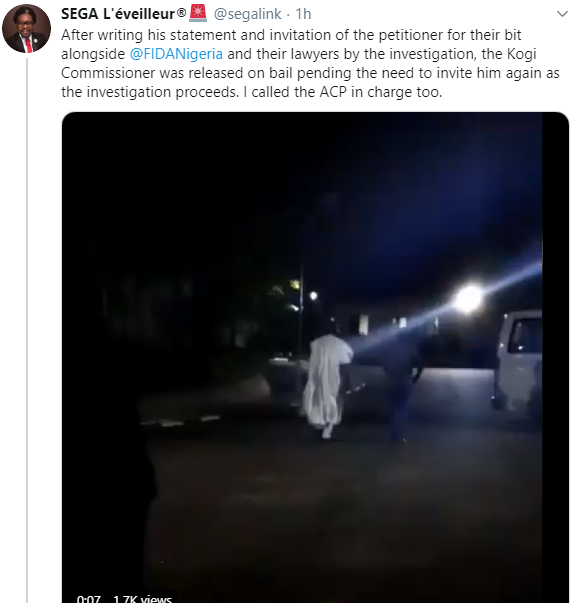 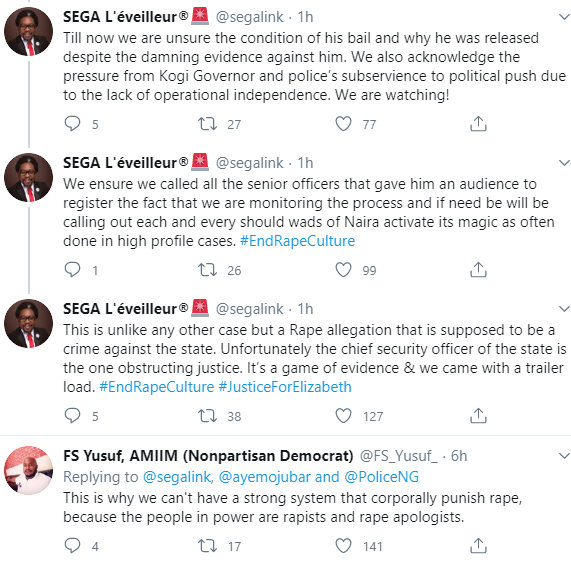 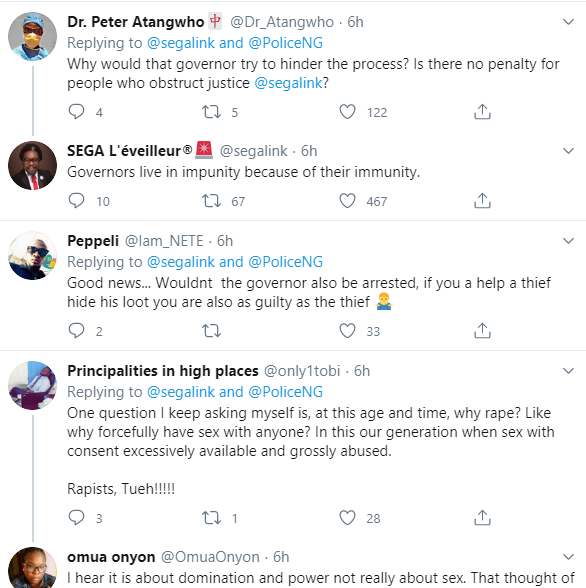 The post Kogi Commissioner that allegedly battered and raped beauty queen is called in for questioning after damning evidence against him was gathered (video) appeared first on Linda Ikeji Blog.
Courtesy of spobam