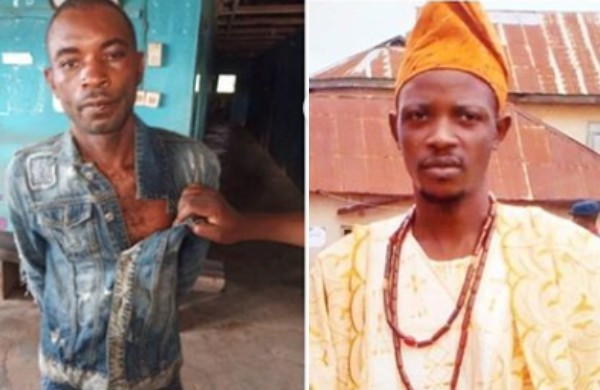 The Ekiti State police has arrested a Tiv man identified simply as Sunday, after being linked to the death of 35-year-old Onibedo of Ilotin community of the state, Chief Sola Fatunla.  Before the incident, Sunday had apologized to the deceased for accusing him of snatching his wife Tadeni who he had two kids with before their marriage collapsed. The apology came after he found out that Fatunla and his wife were mere family friends.  But events took a tragic turn on Sunday when Fatunla followed the man to the bush.Fatunla was killed last Sunday, while accompanying the suspect to where he claimed his charcoal was seized. Sunday had allegedly begged Fatunla to use his influence as a chief in Ikole Ekiti, to plead with some people he claimed had seized his charcoal in the bush. He ran out of luck after his wife who he abducted alongside the Ekiti Chief, escaped while he and his acomplices allegedly took the deceased to a different location where he was beaten with cutlass and set ablaze.  A police source told Daily Trust;  “While the Chief was accompanying him to where his charcoal was seized, the Tiv man allegedly connived with others to abduct Chief Fatunla and Miss Tadeni somewhere around Iyemero Ekiti, in Ikole local government, Ekiti State.“The Chief was strangled to death and his corpse set on fire. However, Miss Tadeni escaped from the abductors. Sunday and his other accomplices were caught by vigilante men in the Pategi area of Kwara State as they were escaping.“When the vigilante men stopped Sunday and his accomplices and were questioning them as to their mission in the area, especially despite the lockdown, Chief Fatunla’s phone that Sunday kept in his pocket rang and he refused to answer the call. One of the vigilante men collected the phone and answered the call only to be told that the owner of the phone was abducted.“The vigilante men then handed Sunday and the others to the police in Kwara State, who transferred them to the police in Ekiti State. Chief Fatunla’s remains had been recovered and deposited in the mortuary, while Sunday and the other suspects are being detained by the police in Ekiti State.”The post Jilted husband allegedly burns Ekiti chief alive for ‘snatching his wife ‘ appeared first on Linda Ikeji Blog.