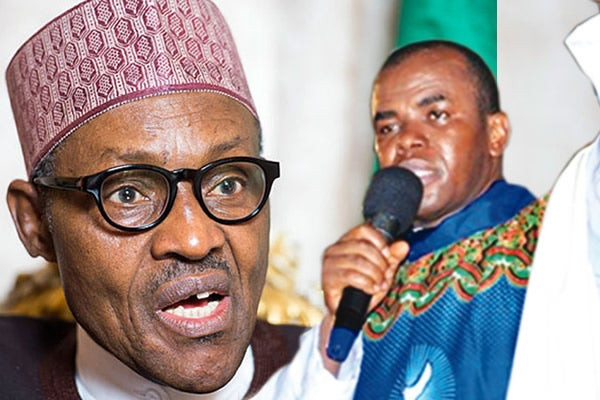 The Spiritual Director, Adoration Ministry, Enugu, Nigeria (AMEN), Fr Ejike Mbaka, has said the Buhari-led administration will be courting the wrath of God should they attempt to fight him for calling for the resignation or impeachment of President Buhari. The clergyman who in 2015 declared his support for President Buhari during the elections, shocked Nigerians recently when he condemned the Buhari government and called for their removal. Read here. Reacting to his outburst, the Presidency alleged that Mbaka started attacking the Buhari government after his request to be given contracts was turned down. Read here. Speaking in his church last Sunday, May 2, the clergyman said that he would be the last person the Buhari government would fight, adding that should they fight him, the anger of heaven would fall on them. “The last person this administration should fight is Father Mbaka because if they speak against me, the anger of heaven will be upon them and how they will end will shock everybody.I represent the poor, the less privileged. I represent the nobodies; I represent the unemployed, I represent the sick, I represent the dehumanized. All the downtrodden in this country, I am their father. So, when my children are crying I cannot be silent” he said  The clergyman also claimed the Presidency was attacking him because he blessed Nnamdi Kanu, leader of the proscribed Indigenous People of Biafra. “If they are worried that I am blessing Nnamdi Kanu, wherever he is, God is blessing him. He is breathing; that he sleeps and wakes up, is it not blessing? Or is he not my brother? Spiritually, is he not my son? So what is their problem? They are busy branding people and communities terrorists.If what is happening in Kaduna, Kano, Nasarawa, Maiduguri, Benue, Niger; if all these places are branded terrorist states, will the whole Nigeria not be branded a terrorist country? If anybody says the truth, the person becomes a terrorist,” he added.They should be careful because the insecurity I am talking about can affect them. Even the Shehu Garba who is talking, the bandits can come and kill him'' he said  The post If they speak against me, the anger of heaven will be upon them and how they will end will shock everybody- Fr Mbaka reacts to FG’s comment about him appeared first on Linda Ikeji Blog.
Courtesy of spobam