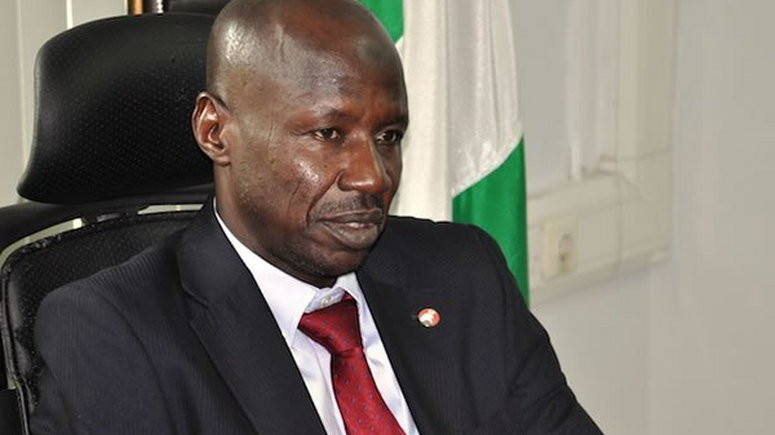 The Presidential panel investigating corruption allegations against the suspended acting Chairman of the Economic and Financial Crimes Commission, EFCC, Ibrahim Magu has started probing his relationship with a Bureau De Change company based in Kaduna that has transacted business in the range of  N336 billion, $435 million and about 14 million Euros.  Vanguard reports that the embattled boss of the antigraft agency is expected to respond to the discovery by the Nigerian Financial Intelligence Unit, NFIU, that he allegedly has connection with the said Bureau De Change. A source within the presidential panel tod the publication  “From the issues before the committee, there are two big issues concerning Bureau De Change being allegedly linked to Magu in Kaduna and that Bureau De Change has been discovered by the NFIU to have transacted business in the region of N336 billion, $435 million and about 14 million Euros.There was another allegation against Magu that a relatively unknown Pastor in Lagos who was linked with Magu was discovered to have N573 million in his account. Also, there was a famous lawyer in Lagos, who took N28 million from the Bureau De Change.” Meanwhile, unknown persons allegedly broke into the new office of the NFIU and destroyed computers containing certain vital and sensitive documents that could help in the investigation of the former EFCC boss. According to reports, some officials of the NFIU had on Thursday, July 9 appeared before the Justice Ayo Salami panel investigating Magu to clarify certain grey areas especially as it relates to some accounts suspected to have been used to move money. The NFIU officials it was gathered told the panel that by their operational protocols and procedure, they don't go about with such documents. The NFIU officials advised members of the panel to visit their office on Friday morning July 10 to see the documents they requested for.   However, it was alleged that before the panel members got to the NFIU office on Friday morning July 10, some unknown person had broken into their office, went straight to the room where the documents were stored in the computers, and destroyed them all. Recall that the NFIU was the agency that investigated all the allegations of financial malfeasance against Magu, in addition to the fact that the agency was only recently severed from the EFCC. Magu appeared at the panel for the 5th day at about 10am. Sources at the venue, the Old Banquet Hall said Magu had developed running nose on Thursday, July 9 which prompted the invitation of some medical experts to attend to him.   The post Ibrahim Magu probed over links with Kaduna-based Bureau De Change that has done transactions worth N336 billion, $435 million and 14 million Euros appeared first on Linda Ikeji Blog.
Courtesy of spobam