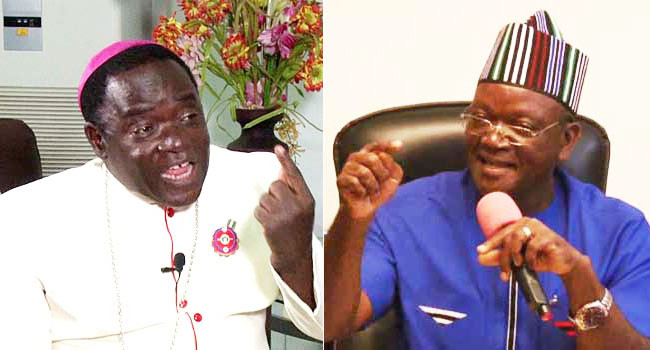 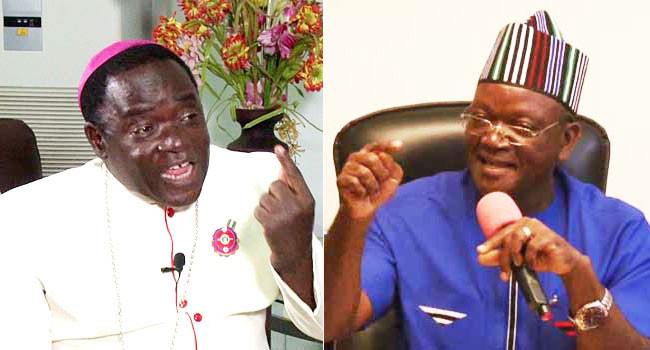 Governor Samuel Ortom has slammed the Presidency for tackling Catholic bishop of Sokoto diocese, Mathew Kukah over his comments about the Buhari-led administration before the US Congress.  LIB reported the Presidency had accused Kukah of trying to sow discord and strife among Nigerians following his comment of Buhari showing preference to people of his religion and worsening the rivalry between Christians and Muslims. The Presidency had also described Kukah's claim of only Christian schools being targeted by bandits or terrorists as untrue. Reacting to the Presidency's comment in a statement released by his media aide Terver Akase, Ortom who warned the Presidency against intimidating Nigerians who want the best for the country, stated that he would have similar things to what Kukah said if he was addressing same audience.  Stressing that the country is practicing democracy which has no room for repression and dictatorship, the Governor added that the constitution guarantees freedom of speech to all citizens, unlike a military regime which suppresses the right of the people to voice their opinions on challenges facing their country. The statement read;  “Benue State Governor, Samuel Ortom describes as unfortunate, the response of the Presidency to the Catholic Bishop of Sokoto Diocese, Bishop Matttew Kukah’s address to United States Congress Committee on Foreign Affairs regarding the wave of insecurity in the country.“The Governor says he stands with Bishop Kukah on the issues he raised and stresses that he would have said similar things if he were to address the same audience.“He advises the Federal Government to stop intimidating patriotic Nigerians who are raising genuine concerns over the worsening security and economic situation in the country.“Governor Ortom states that the country is practicing democracy which has no room for repression and dictatorship. He notes that the country’s Constitution guarantees the freedom of speech to all citizens, unlike a military regime which suppresses the right of the people to voice their opinions on challenges facing their country.“He says Bishop Kukah is one Nigerian who is selfless and speaks his mind frankly on national issues calling on the government to ensure justice, the rule of law and equity for all.“The Governor wonders why the Presidency has chosen to politicize the views of Bishop Kukah when all the issues he highlighted in his address are facts about the country.“He says Kukah was right when he stated that nepotism has been elevated above federal character by the present administration. He further agrees with the Bishop that Christians across the country are targets of elimination and thousands have already fallen to the sword of jihadist supremacists.“Governor Ortom states that Kukah is not to blame for the ranking of Nigeria as the 8th least peaceful country in Africa and the rating of killer herdsmen as the 4th deadliest terror group in the world by the Global Terrorism Index.“He expects the Presidency to rather be worried that Nigeria is ranked as the most terrorised nation in Africa with an average of over 2,000 deaths per year on account of terrorism.“He emphasizes that the combative approach the Presidency has adopted in engaging citizens on issues will not solve the problems confronting the country.“Governor Ortom says Bishop Kukah is not the first Nigerian to address a foreign audience on the security situation in the country. He recalls that in February, 2015 President Buhari was at the time the candidate of All Progressives Congress, APC, when he delivered a speech at Chatham House in London, where he stated that “Boko Haram has sadly put Nigeria on the terrorism map, killing more than 13,000 of our nationals.” The President went on to announce to the world on that occasion that apart from the civil war era, Nigeria had never been more insecure in the country’s history.“The Governor states that if a man who was seeking to govern the country could reel out such scary statistics, why will his aides now launch media attacks on a clergyman who is only advocating peace and is drawing the attention of the global community to the plight of helpless Nigerians."The post I would make same comments as Bishop Kukah if I was addressing same audience – Governor Ortom slams Presidency appeared first on Linda Ikeji Blog.
Courtesy of spobam