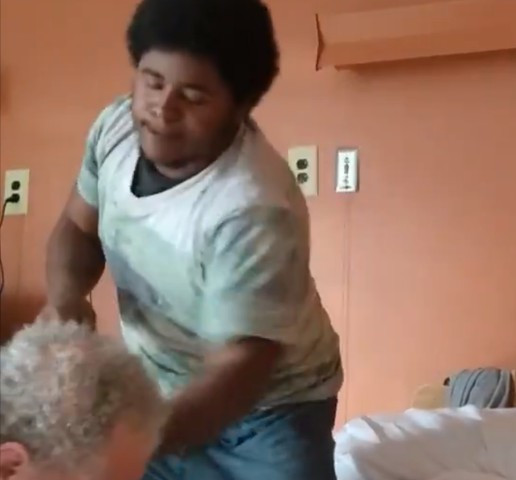 Police made an arrest on Thursday after a heartbreaking viral video showed a young man punching an elderly patient lying in bed in a nursing home. Police said in a statement that they are holding a 20-year-old man in connection to the assault and battery of an elderly male at Westwood Nursing Center in the 16500 block of Schaefer on Detroit’s west side. In the video, the 20-year-old is seen violently punching the 75-year-old man and the young man can be heard telling the victim something about staying out of his bed. Detroit Police Chief James Craig said the department is investigating the incident that occurred at Westwood Nursing Center on the city's northwest side.  "What our investigation has revealed so far was the nursing home was unaware of an assault until they saw the video," Detroit police Chief James Craig said at a news conference Thursday. "We are still investigating that aspect of the case, but we do have a suspect in custody." Detroit Police acknowledged that the sharing of the video helped them track down and arrest the suspect. The police thanked the public for alerting them to the video. "Thank you to everyone for your assistance in bringing the senior home incident to our attention," the department said on Twitter. "The @detroitpolice is investigating the situation, and an arrest has been made." It appears the suspect also posted another video showing the beating of a woman who is confined to a bed. Detroit police say they are aware of that second video and are also investigating that assault. A lawyer for the Westwood Rehabilitation Nursing Center said the suspect in the May 15 attack on the 75-year-old man was a temporary resident there for rehabilitation and recovery, according to NBC affiliate WDIV. The victim's injuries were not thought to be life-threatening, officials said. The suspect's name was not released. In a tweet Thursday night, President Donald Trump appeared to reference the attack, expressing concern for the victim. "Can this be for real? Where is this nursing home, how is the victim doing?" he tweeted. 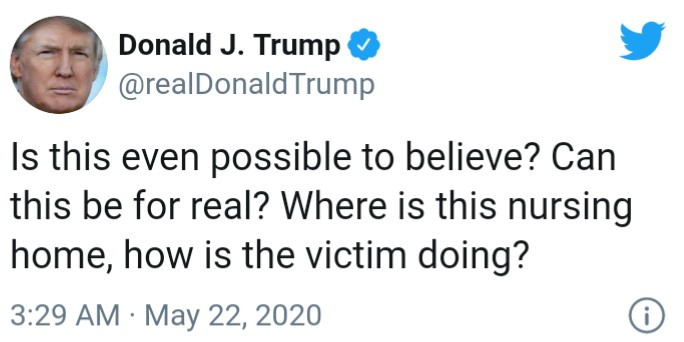 Watch the video below.       View this post on Instagram           A post shared by Lindaikejiblog (@lindaikejiblogofficial) on May 22, 2020 at 7:00am PDTThe post Heartbreaking footage showing a man, 20, punching an elderly nursing home patient gets Trump’s attention (video) appeared first on Linda Ikeji Blog.
Courtesy of spobam

Update: 13-year-old girl jumped down two-storey building to evade punishment from her bosses in Abia – NSCDC