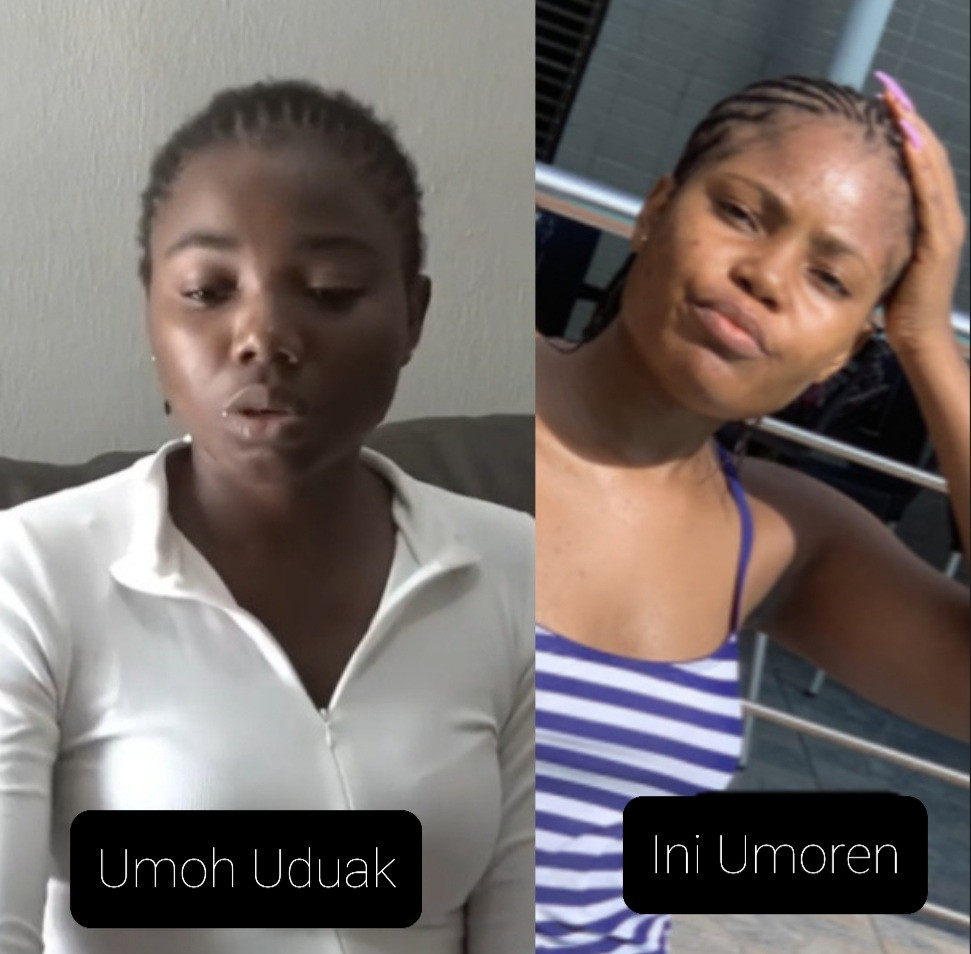 Umoh Uduak, the friend who took to Twitter to raise alarm after Uyo job seeker, Iniubong Umoren, went missing, has given first-hand account of the incident leading up to Ini's murder and the aftermath. Umoh revealed that Ini was an orphan who graduated from Univeristy of Uyo in 2019 and was waiting to go for NYSC. She explained that while they were undergraduates, Ini worked as a teacher to see herself through school since her parents are no more. She was sometimes late for lectures because she was busy with her own students. After graduation, NYSC was delayed due to the pandemic. While waiting to be called up, she said Ini decided to get a job. 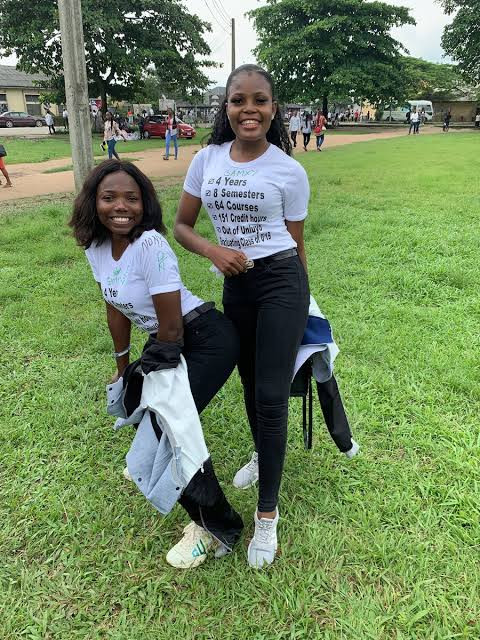 Umoh Uduak and Ini Umoren after their final paper She was working elsewhere and needed another job and this caused her to make the Tweet that exposed her to a predator who goes online to offer jobs to unsuspecting job seekers. Umoh told of how she became suspicious when she received a voice note from Ini on the day she went for the interview,  April 29, 2021, She said Ini was screaming in the voice note. She said that was when she went on Twitter to raise alarm, then contacted Ini's siblings. She said Ini's sister immediately reported to the police and gave them the address of the place where she was invited for the interview. However, she alleges that the police told them it wasn't up to 24 hours so they couldn't go searching on Thursday, April 29. She said that Ini's sister returned to the station on Friday morning and was told that they can't go to the address with the police van and she has to rent them a van and buy fuel. Umoh Uduak said she solicited for funds online since she couldn't do much as she was in Lagos to find a job too. She claims she sent the money raised online to the sister to give to police. When the police got to the address given to Ini to come for the interview, they allegedly found the suspect's father. She said the suspect is a man known as Frank Uduak Akpan. His Twitter and Facebook account was traced by Nigerians after the alarm was raised. 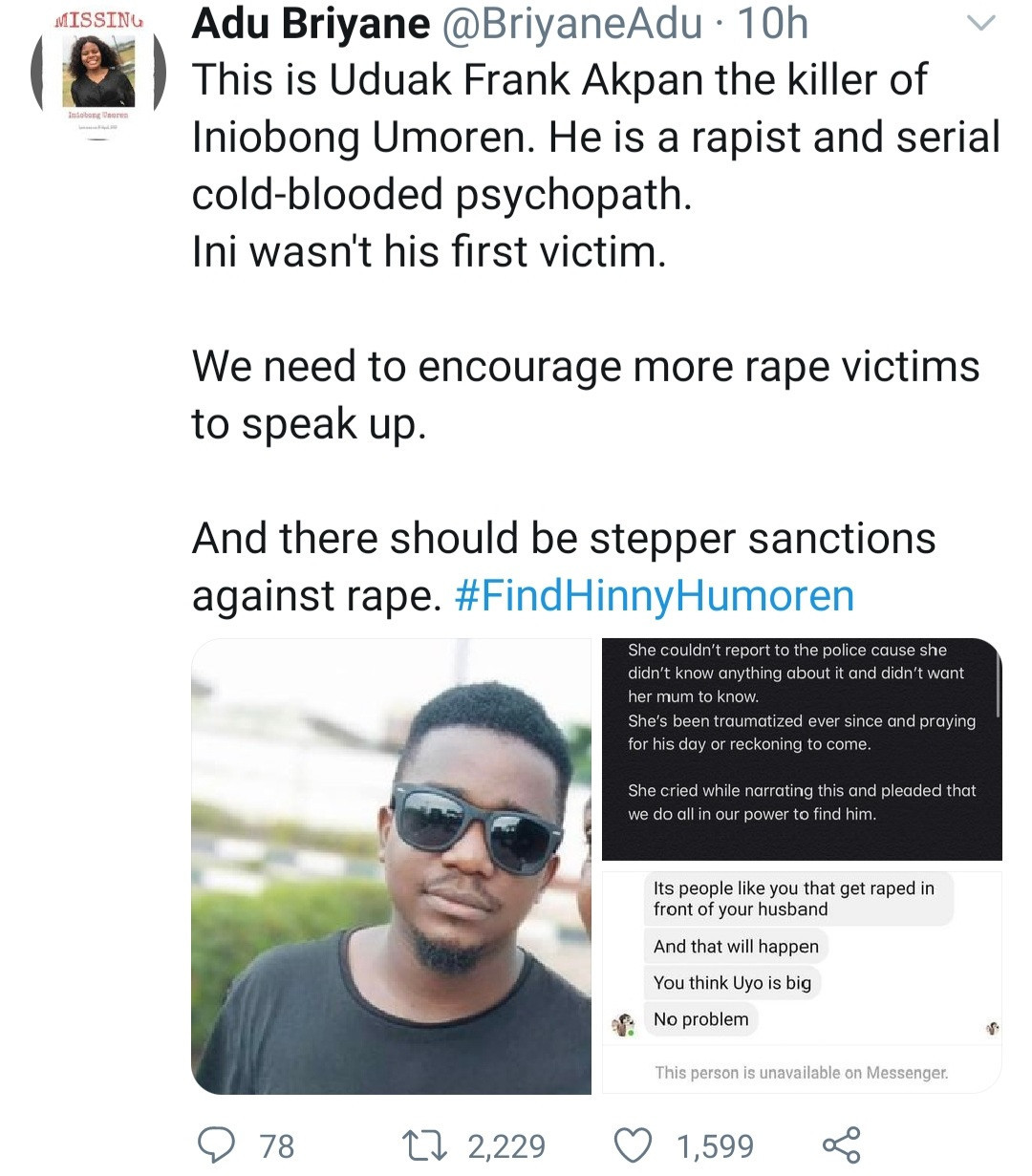 He allegedly has other victims too who also recently opened up, including one who said she was drugged, stripped naked, raped and filmed, after which Uduak kept using her naked picture to blackmail her and collect money from her. Umoh said Frank Uduak Akpan took himself to the police station. She also mentioned an accomplice who works with him. She added that Ini only wanted a job as she didn't want to be a liability but ended up dead. Listen to her recount the tragic incident during an interview with TVC.      View this post on Instagram           A post shared by Lindaikejiblog (@lindaikejiblogofficial)The post Friend of slain Uyo job seeker gives first-hand account of the incident leading up to Ini Umoren’s death and how they found the suspect (video) appeared first on Linda Ikeji Blog.
Courtesy of spobam