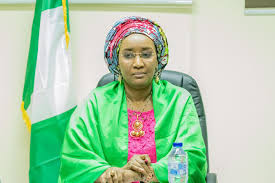 The Minister of Humanitarian Affairs, Disaster Management and Social Development, Sadiya Farouq, has announced plans by the Federal government to distribute N729 billion among 24.3 million poor Nigerians. Ms. Farouq who disclosed this at the inauguration of the Federal Government’s emergency intervention database for the urban poor, said each of the beneficiaries would get N5,000 each for a period of six months. A statement issued in Abuja by the minister’s aide, Nneka Anibeze, said the intervention would serve as a cushion for those further impoverished by the COVID-19 pandemic. “According to records, about 24.3 million poor and vulnerable individuals were identified at the end of 2020 and registered into the National Social Register. Each beneficiary will receive N5,000 for a period of six months.”the statement in part readsThe post FG to pay 24.3 million poor Nigerians N729bn – Minister of Humanitarian Affairs, Sadiya Farouq reveals appeared first on Linda Ikeji Blog.
Courtesy of spobam