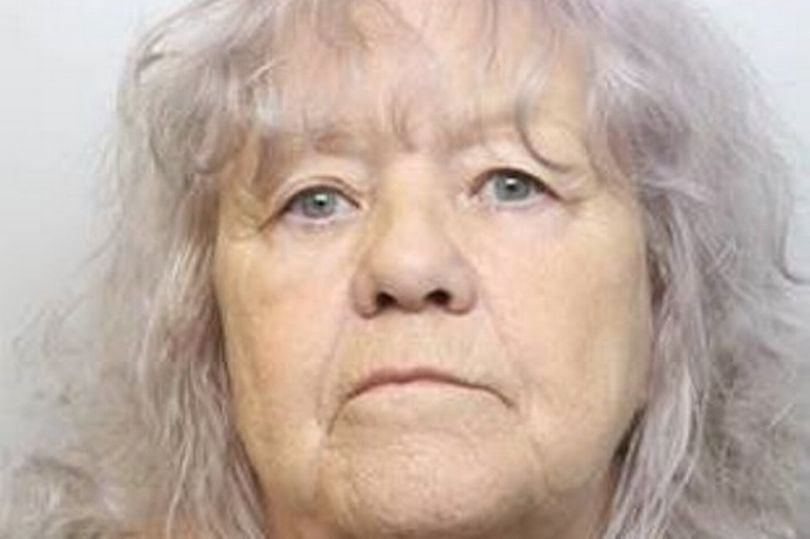 An elderly woman who pretended to be disabled and used false identities to fraudulently claim more than £1 million in benefits to spend on holidays and nail treatments has been jailed. Christina Pomfrey, 65, from Runcorn in Cheshire, claimed she had multiple sclerosis, was blind and needed a wheelchair as she swindled the money over 15 years. She also used the names of unwitting relatives including her own sister to pocket disability living allowance, carers allowance, and other state handouts. On one faithful day,  surveillance by investigators showed her driving and going for a walk while reading a newspaper despite her claims that she was vulnerable.  Appearing before the Manchester Minshull Street crown court on Monday, she was sentenced to three years and eight months imprisonment for 34 counts including fraud, false accounting, and making or supplying articles for use in frauds. Using two names – Christina Pomfrey and Christina Brown – she fraudulently claimed £1,010,090.66 in welfare benefits over almost 15 years. The CPS said at one point she had received more than £13,000 a month.Over six years, Pomfrey laundered £88,994.21 through the bank account of her daughter Aimee Brown, 34, who was sentenced to a suspended 18-month prison sentence for money laundering. Both pleaded guilty to the offences at an earlier hearing in March.George Ward, senior crown prosecutor of CPS Mersey Cheshire, said: “Christina Pomfrey is a shameless, serial fraudster who has systematically defrauded a system that is meant to help the most vulnerable in our society. “This is one of the biggest social security and local authority frauds ever to be prosecuted by the CPS and I would like to thank the Department of Work and Pensions and Halton and Oldham councils for their help in bringing this prosecution.” The court heard that despite an admission of guilt and remorse to investigators in December 2017, Pomfrey continued to make dishonest benefit claims while on bail. Sentencing, Judge Sophie McKone said: “You grossly exaggerated your disabilities in pretending you were completely blind and that your multiple sclerosis was of such severity that you required significant and costly care. “This was money to which you were not entitled. Over 15 years, you stole £1m from your fellow citizens. Money which would have gone to people who justly deserved it, money that could have gone to schools and hospitals. “This was a determined benefit fraud on a substantial scale. You claimed you spent money on others – whether or not that is true, you spent some money on holidays, beauty treatment, clothes, restaurant and hotels.”The post Elderly womanwho falsely claimed more than 1m in benefits to spend on holidays and nail treatments is jailed appeared first on Linda Ikeji Blog.
Courtesy of spobam