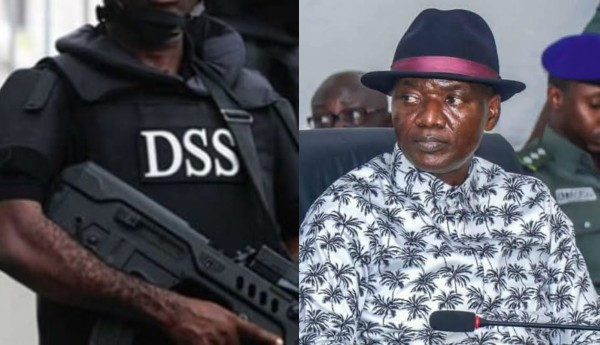 The Department of State Service (DSS) on Monday June 1, confirmed an alteration in the exemption certificate issued by the National Youth Service Corps (NYSC) to the Deputy Governor of Bayelsa State, Senator Lawrence Oborawharievwo Ewhrudjakpo. This is coming after the candidate of the Liberation Movement (LM) in the November 16, 2019 governorship election in Bayelsa, Vijah Opuama petitioned the tribunal, alleging that Ewhrudjakpo submitted forged exemption certificate and documents that contain false information to the Independent National Electoral Commission (INEC) before the election. Abdulsalam Ibrahim, DSS Head of Legal Department who represented DSS’ Director General, told the Bayelsa State Governorship Election Tribunal in Abuja that the alteration was uncovered following an order issued by an Abuja court for an investigation into allegation of forgery against the Deputy Governor.  Ibrahim said;   “Based on the foregoing and the relevant documents forwarded to this service, it is evident that the subject altered the spelling of his surname to reflect the letter D as against the letter O in the certificate of exception earlier issued by NYSC.” However under cross-examination by lawyer to the Peoples Democratic Party (PDP) Emmanuel Enoidem, Ibrahim confirmed that the alteration in the certificate was effected by the NYSC upon the request by Ewhrudjakpo. The DSS Head of Legal Department also agreed that the bearer of a name knows how best to spell his/her name.  When asked to read paragraph 7 of a document marked “P3” (one of the reports the investigation by the DSS), Ibrahim read thus: “It is based on this recent finding, that we wish to bring to the notice of the DSS that we (the NYSC) corrected the certificate of exemption to read Ewhrudjakpo. Only the last letter A was corrected to read letter O.” The DSS senior official also identified an attachment to the report as “Annexture 2,” which he explained “is a letter to the NYSC seeking a request for correction, following which the correction was now made.” Following the conclusion of Ibrahim's testimony, the petitioner’s lawyer Pius Danbe Pius said his next witness is Ewhrudjakpo who has been subpoenaed to produce the original copy of the certificate of exemption. The case was adjourned till Tuesday June 2 by the tribunal’s Chairman, Justice Ibrahim Siraj. It is expected that the hearing of a motion by Ewhrudjakpo, challenging his invitation as the petitioner’s witness will be heard on the said date. The post DSS confirms alteration in Bayelsa Deputy Governor’s certificate appeared first on Linda Ikeji Blog.
Courtesy of spobam