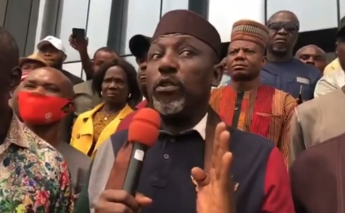 Senator Rochas Okorocha has warned Imo state governor, Hope Uzodinma, not to take his calmness for granted. He stated this while addressing his supporters on Monday, February 22. Recall that on Sunday, February 21, Okorocha and some of the state government officials clashed when he reopened the Royal Palm Hotel and Apartment owned by his wife, Nkechi, that was sealed by the state government. Okorocha was arrested by the state police command on the order of the state government. Speaking to his supporters on Monday, Okorocha said the state government should not take his calmness for granted.''I have told averybody that I am a man of peace but Hope Uzodinma must never take my calmness and my peaceful disposition for granted. Enough is Enough. I governed this Imo state for 8 years. There was no record of me arresting anybody. I was the most abused governor. People abused me but I never in anyway or anyday arrested a man'' he said Watch the video below      View this post on Instagram           A post shared by Lindaikejiblog (@lindaikejiblogofficial)The post ”Don’t take my calmness for granted”- Rochas Okorocha warns Gov Uzodinma (video) appeared first on Linda Ikeji Blog.
Courtesy of spobam