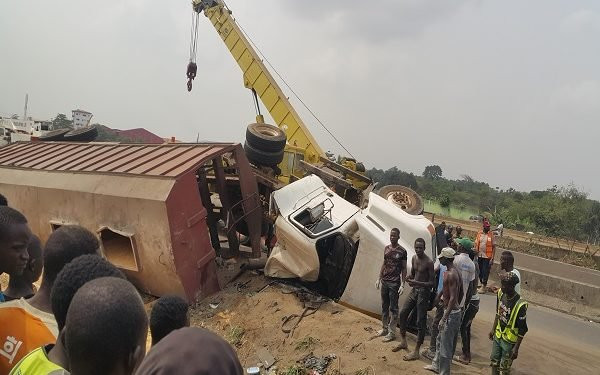 A pedestrian was crushed to death after a truck carrying sacks of grain derailed off the Lagos-Ibadan road today Wednesday, February 3. The truck driver reportedly lost control of the wheel and derailed off the road. Sadly, the pedestrian who was walking by the road was hit and crushed to death. The body has since been removed from the road. The accident has caused serious traffic along the expressway. Men of the Nigeria Police, Federal Road Safety Corps (FRSC), and others have arrived the scene to restore normal flow of traffic. Efforts are also being made to remove the faulty truck and its content from the road. The post Derailed truck kills pedestrian on Lagos-Ibadan expressway appeared first on Linda Ikeji Blog.
Courtesy of spobam