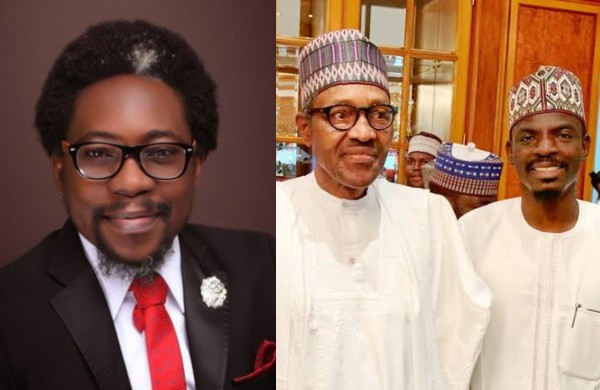 Human rights activist, Segun Awosanya a.k.a Segalink has slammed Presidential aide, Bashir Ahmad after he defended the arrival of Chinese doctors in Nigeria to help in the fight against Coronavirus.  This is coming after President Buhari's Special Assistant on Digital/New Media, Tolu Ogunlesi countered Segalink on his tweet which suggested that "the federal government imported chinese doctors in a bid to loot at the expense of impoverished people besieged by the pandemic".  Segalink had tweeted; It is official. We don’t have a Govt worthy of being called one. In their rabid bid to loot at the expense of an impoverished people besieged by the pandemic they went along to import ChineseDoctors while Nigerians are being humiliated in China. Our Govt is worse than a plague! Tolu Ogunlesi however countered the tweet as he disclosed that the Nigerian government never spent anything to bring in the doctors. He said the Chinese doctors arrived the country at the expense of the China Civil Engineering Construction Corporation (CCECC).  He tweeted;  Again and again it has been said that the @CCECC8 effort referred to below is Corporate CSR, it did not cost @NigeriaGov  anything. It’s CCECC’s DONATION to Nigeria! The Dubious Segalink knows this, but this kind of misinformation is exactly what his audience expect from him. 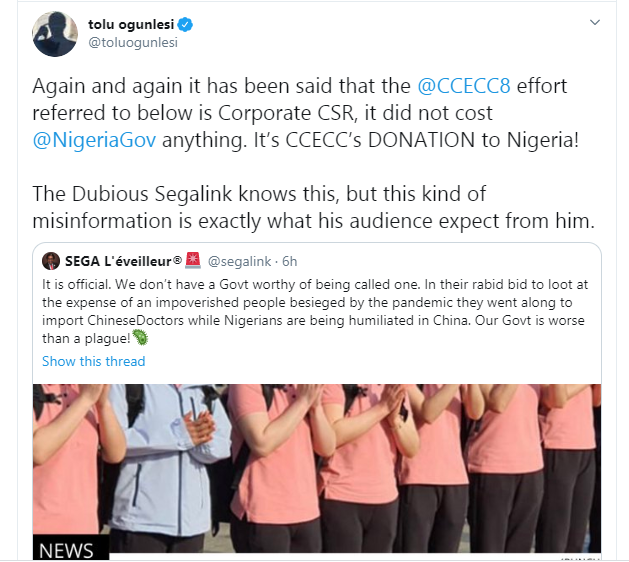 Bashir Ahmad backed Ogunlesi's disclosure while also revealing that Segalink blocked him on the social media platform, for pointing out same to him.  He wrote;  I hope this clarification won’t cause you a block from the ‘mighty’@segalink. Pointed it out to him earlier, few minutes after he blocked me, it’s really hilarious, I do hope he doesn’t think being blocked by him will make my work uneasy. 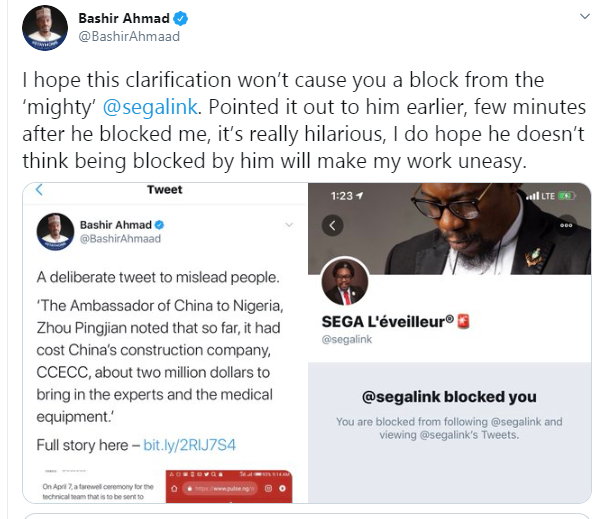 Segalink however fired back by alleging that Bashir Ahmad was blocked for lying against him.  The activist tweeted;  You know you and those you slave for don’t actually exist in my horizon? Engaging you is a chronomicide (bloody waste of precious time) on my part. You were blocked because of your false allegation that I’m misleading thus proving your sub-literacy. I’m concerned about the peopleLike those you serve who are insensitive to the plight of the people and our fragile institutions, this is not the time to go cap in hand begging for aids when we actually need trade and strategic engagement. Because you are getting stuff free need not tie your hands.Chinese Govt are treating Nigerians like Dogs and you are masturbating over their Greek gift and imported Doctors? Are we starved of Doctors in Nigeria? Didn’t we raise humongous funds via CaCovid to procure what we need? Must we deploy Almajiri approach to everything?!Do you were not blocked because of the pre-masticated and regurgitated inanities you reduced into tweets but the foolish deployment of well worn drive to discredit people unjustly. Why do I need to mislead people? Who are you and your slave drivers globally? Nigger please… 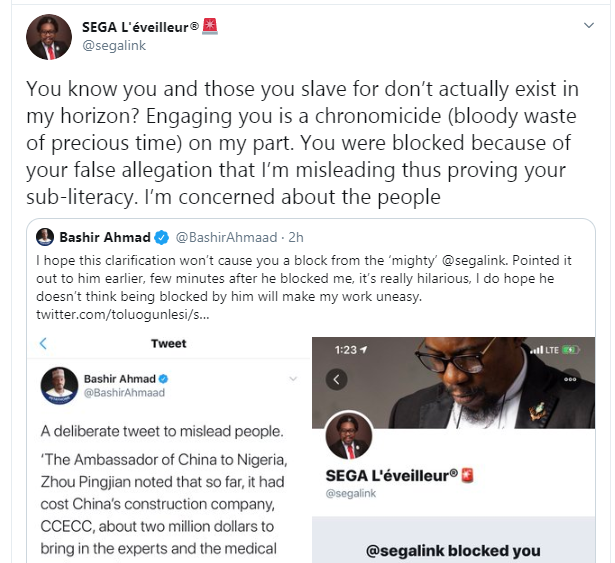 The Presidential aide responded to the allegation by disclosing that Segalink has blocked and unblocked him numerous times. He added that the activist doesn't matter at all to him.  Bashir Ahmad tweeted in response;  You must have lost count of the number of times you blocked and unblocked me, you know what that means? You can’t do without seeing me on your TL. Want you to know that you don’t matter to me, at all. You can block and unblock me a million times, you will still remain unnoticed. 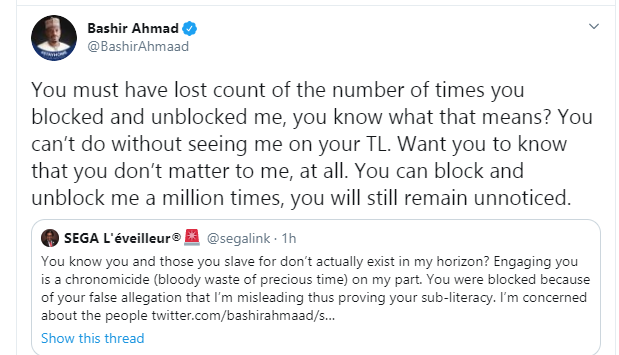