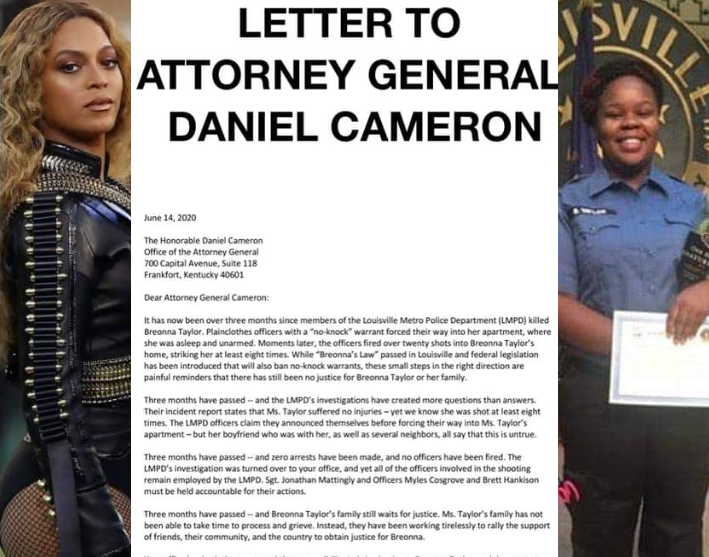 Beyoncé has written an open letter to Kentucky’s Attorney General Daniel Cameron, urging him to use his power to bring criminal charges against the officers who shot and killed Breonna Taylor in her home. Breonna, a 26-year-old African-American emergency medical technician, was shot dead by Louisville Metro Police Department (LMPD) officers on March 13, 2020. Three officers executing a no-knock search warrant entered Breonna's apartment in Louisville, Kentucky. Gunfire was exchanged between Taylor's boyfriend Kenneth Walker and the officers. Walker said he believed that the officers were intruders. The LMPD officers fired over twenty shots and Breonna Taylor was hit 8 times. She died in her hallway. Breonna's death has angered a lot of people and there have been calls for justice. In a letter posted on Beyoncé’s official website on June 14, the singer urged the Attorney General to "commit to transparency in the investigation and prosecution of these officers’ criminal conduct" and investigate the police department’s response to Taylor’s murder. Beyonce's letter reads: "Three months have passed — and the LMPD’s investigations have created more questions than answers. Their incident report states that Ms. Taylor suffered no injuries — yet we know she was shot at least eight times. The LMPD officers claim they announced themselves before forcing their way into Ms. Taylor’s apartment — but her boyfriend who was with her, as well as several neighbors, all say that this is untrue. "Three months have passed — and zero arrests have been made, and no officers have been fired. The LMPD’s investigation was turned over to your office, and yet all of the officers involved in the shooting remain employed by the LMPD. Sgt. Jonathan Mattingly and Officers Myles Cosgrove and Brett Hankison must be held accountable for their actions. "Three months have passed — and Breonna Taylor’s family still waits for justice. Ms. Taylor’s family has not been able to take time to process and grieve. Instead, they have been working tirelessly to rally the support of friends, their community, and the country to obtain justice for Breonna. "Your office has both the power and the responsibility to bring justice to Breonna Taylor, and demonstrate the value of a Black woman’s life." She added in the letter: "Don’t let this case fall into the pattern of no action after a terrible tragedy. With every death of a Black person at the hands of the police, there are two real tragedies: The death itself, and the inaction and delays that follow it. This is your chance to end that pattern. Take swift and decisive action in charging the officers. The next months cannot loo like the last three." Beyoncé then urged her fans to sign a coinciding petition, located at the bottom of the letter, to demand further justice for Taylor. 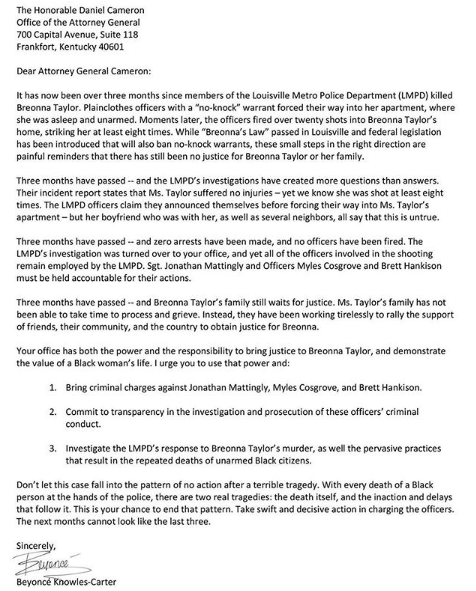 Last month, Beyoncé also demanded justice for George Floyd who died after a Minneapolis police officer, Derek Chauvin knelt on his neck for about 8 minutes 46 seconds while he begged that he cannot breathe.  She said in a video at the time: "We all witnessed his murder in broad daylight. We’re broken and we’re disgusted. We cannot normalize this pain. I’m not only speaking to people of color. If you’re white, black, brown, or anything in between, I’m sure you feel hopeless about the racism going on in America right now. No more senseless killings of human beings. No more seeing people of color as less than human. We can no longer look away."  The post Beyonc writes open letter to Attorney General Daniel Cameron to demand ‘swift’ justice for Breonna Taylor appeared first on Linda Ikeji Blog.
Courtesy of spobam