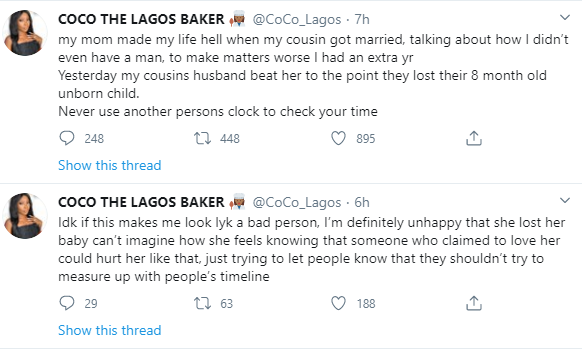 A baker took to Twitter to pass a message across with her cousin's misfortune. However, Twitter users felt her message was insensitive. @Coco_Lagos said her mother made her life hell when her cousin got married before her. She added that her cousin has now lost her unborn baby at 8 months of pregnancy after her husband beat her up. She added a lesson about comparison to her tweet, advising her followers to "never use another person's clock to check your time." She wrote: "my mom made my life hell when my cousin got married, talking about how I didn’t even have a man, to make matters worse I had an extra yr Yesterday my cousins husband beat her to the point they lost their 8 month old unborn child. Never use another persons clock to check your time." She added: "Idk if this makes me look lyk a bad person, I’m definitely unhappy that she lost her baby can’t imagine how she feels knowing that someone who claimed to love her could hurt her like that, just trying to let people know that they shouldn’t try to measure up with people’s timeline."

Twitter users responded to her message, telling her that it is wrong to use another's misfortune to pass a message. See some reactions below. 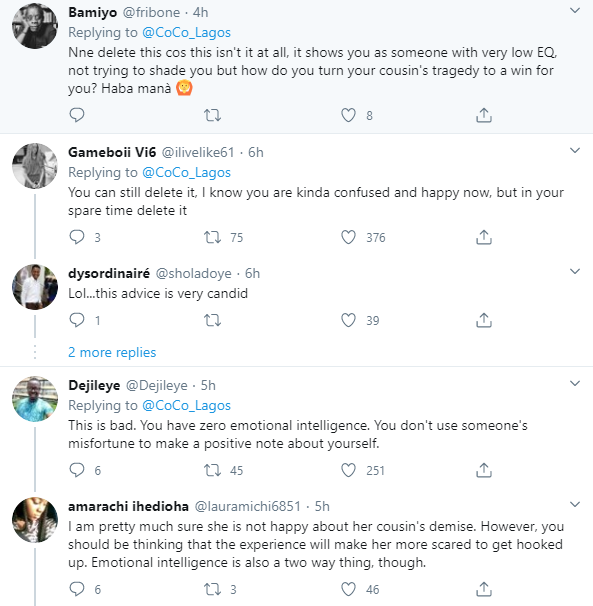 The post Baker accused of being insensitive after she narrated how her cousin lost her unborn baby after her husband beat her up appeared first on Linda Ikeji Blog.