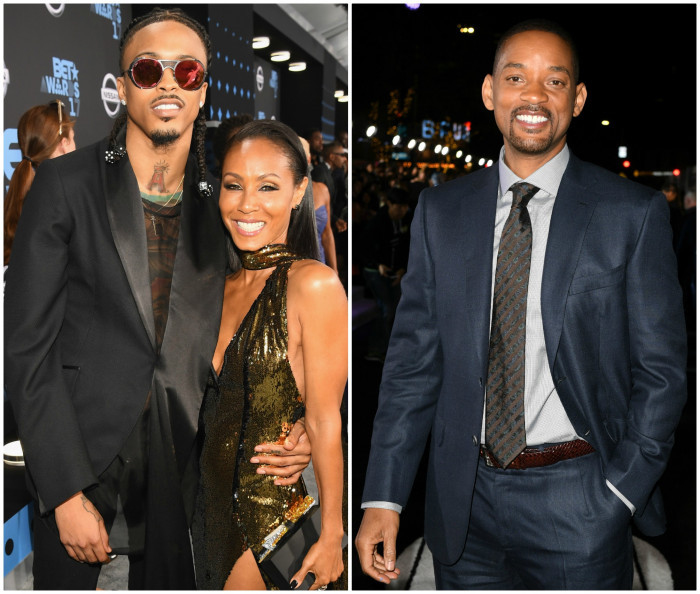 August Alsina has confirmed that he had an affair with Will Smith's wife, Jada Pinkett Smith.  27-year-old Alsina was introduced to 48-year-old Pinkett in 2015 by her son Jaden. They became very close and he even had a vacation with the family in Hawaii in 2016 and attended the 2017 BET Awards with her.  Rumour of their affair circulated for some time, with fans thinking Alsina's 2019 song "Nunya" was written about the actress as it had the line "You got me feeling like it was an act, you're just an actress/Putting on a show 'cause you don't want the world to know." The track's official video also featured a shot of a text message from a love interest listed as "Koren," which just so happens to be Jada's birth-given middle name. August Alsina has however repeatedly denied this.  The 27-year-old singer who talked about his new album The Product III: stateofEMERGEncy in an interview with radio personality Angela Yee, alleged that he received Will Smith's blessing for the romantic affair.  He said;  "People can have whatever ideas that they like, but what I’m not OK with is my character being in question. When certain things are questionable that I know is not me, or that I know that, what I haven’t done — contrary to what some people may believe — I’m not a troublemaker. I don’t like drama. Drama actually makes me nauseous. "I also don’t think that it’s ever important for people to know what I do, who I sleep with, who I date, right? But, in this instance, it’s very different, 'cause as I said there is so many people that are side-eyeing me, looking at me questionable about it.“I actually sat down with Will [Smith] and had a conversation due to the transformation from their marriage to life partnership … he gave me his blessing.” He also disclosed that he fell in love with Pinkett and even lost "money, friendships [and] relationships" because of rumours of having a secret affair with her. Alsina added that he thinks "it’s because people don’t necessarily know the truth, but he never did anything wrong." He said;  “I totally gave myself to that relationship for years of my life, and I truly and really, really deeply love and have a ton of love for her. I devoted myself to it, I gave my full self to it — so much so to the point that I can die right now and be okay with knowing that I truly gave myself to somebody.“And I really loved a person, I experienced that and I know what that feels like — and some people never get that in this lifetime. I know that I am completely blessed and this conversation is difficult because it is so much, that it would be hard for people to understand but — once it starts to affect me and my livelihood — I have to speak up about my truth. “I love those people literally like my family. I don’t have a bad thing to say about them. They are beautiful people.”"So much so that being intertwined in that way — walking away from it butchered me. I’m shakin' right now because it almost killed me. Not almost. It did — it pushed me into being another person, my newer self. It. Broke. Me. Down." During the interview, Yee asked “Is it disappointing that she [Pinkett] never addressed it to you, because like you said, you lost out on opportunities?” Alsina responded by saying; “I really can’t even get into the thought of that because I am only responsible for myself, right. And I am only responsible for, you know. what I do. When I am repressing and suppressing things and it starts to affect me. I have to address it. I just always stay solid because I never want to be the person to start confusion.”      View this post on Instagram         Also debunking rumors of having a secret affair with Jada, August Alsina suggested that the actress and her husband Will Smith have an open marriage. . . He also revealed that Will Smith approved of their relationship by giving him his blessingA post shared by Lindaikejiblog (@lindaikejiblogofficial) on Jun 30, 2020 at 9:07pm PDT This is coming after Jada Pinkett Smith said that she and the Bad Boys star haven't faced any cheating issues in their relationship in a June 2019 Red Table Talk episode. The actress however, did recall how she's been in instances in the past where she's been cheated on and been the one to step out on her partner. When PageSix reached out to Jada Pinkett Smith’s representative for comments about the interview, the response they got was “Absolutely not true!!”The post August Alsina confirms romance with Jada Pinkett, says Will Smith gave him his blessing (video) appeared first on Linda Ikeji Blog.
Courtesy of spobam