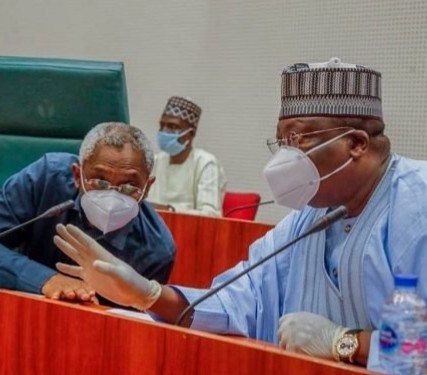 The 100% hike in electricity tariff slated to commence Wednesday, July 1, has been put on hold. This comes after the National Assembly leadership’s intervention at a meeting with the Electricity Distribution Companies (DisCos), the National Electricity Regulatory Agency (NERC) and others in the power chain, Monday night, June 29. The DisCos announced over the weekend that the tariff  pushed forward from April 1 would take effect from July 1. Customers protested the planned increase but the DisCos insisted that only a “cost-reflective” tariff could guarantee their survival to keep the power sector afloat. At Monday’s meeting, Senate President Ahmad Lawan and House of Representatives Speaker Femi Gbajabiamila promised to take the DisCos’ request to President Muhammed Buhari and urged them to push the tariff raise till Aprill 2021. In a statement, Special Adviser (Media) to the Senate President, Ola Awoniyi, said the National Assembly leadership was emphatic at the meeting that the timing of the  hike was wrong. The statement added that the National Assembly leadership told the DisCos that they were not opposed to cost reflective tariff for the power sector to attract the much-needed investment. The DisCos also admitted that they were not fully prepared for the planned tariff hike although they desired it. The statement added that the National Assembly leaders  promised  the electricity distributors  that they would  meet with President Muhammadu Buhari on the issue. The statement said: “The agreement here is that there is not going to be any increase in tariff on July 1.   “The Senate President and the Speaker are going to take appropriate action and meet with the President. “We are in agreement here that there is no question on the justification of the increase but the time is simply not right and appropriate measures need to be put in place. “So, between now and the first quarter of next year, our task will be to work together with you to ensure that we put those blocks in place to support the eventual increase in tariffs.” The statement quoted Lawan as saying that  the government had  been doing a lot as part of its obligation to provide some forms of Intervention. He said: “I’m quite aware that for this year, probably starting from last year, over N600 billion was earmarked for this sector to improve. “The potential increase in the tariff is definitely something that will be of concern to us in the National Assembly. “There is too much stress in the lives of Nigerians today and indeed across the world because of the challenges imposed by COVID-19 pandemic and even before then, we had issues that would always make it tough for our people to effectively pay the tariff. “One way or the other, for this business to flourish, for this sector to be appropriately fixed, for it to attract investment, something has to give way, there is no doubt about that but it is also crucial that we look at the timing for any of our actions.” According to the statement, Gbajabiamila said the National Assembly was on the same page with the DisCos on the issue of cost reflective tariff. Gbajabiamila added: “There is time for everything. A well-intended programme or policy of government can fall flat on the face and never recover if you do it at a wrong time. “Whatever will affect this government is something that should concern all of us. I think this will affect this government. “The timing. I think it will affect the Muhammadu Buhari  government and if it is going to affect his government, we should all rally around our people, our President and the government to make sure we do the right thing, “The good thing is that we have agreed that we need to do something about the cost of electricity.” The representatives of the DisCos said the government should  be ready to continue to bear the difference in the present tariff and what was considered as the appropriate tariff.The post 100% electricity tariff hike put on hold as Lawan and Gbajabiamila intervene appeared first on Linda Ikeji Blog.
Courtesy of spobam